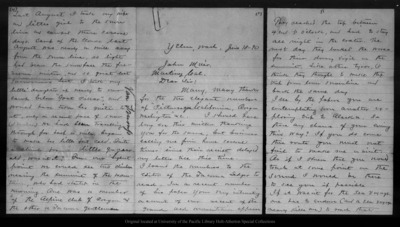 [4]Last August I took my wife and little girl to the snow line and camped there several days. Camp of the clouds last August was nearly a mile away from the snow line, so light had been the snowfall the previous winter, and so great last summer's heat. I took my little daughter up nearly to our camp below "Goat Pillar," and would have taken her quite to it, only a recent fall of snow (3 inches) we had been travelling through for half a mile began to make her little feet cold. Quite a climb for a little 9-year old, wasn't it? From our highest point we could see two climbers nearing the summit of the mountain, who had started in the morning. One was a member of the Alpine club of Oregon and the other a Tacoma gentleman.[1]Yelm, Wash, June 18-90John Muir, Martinez, Cal.Dear sir:Many, many thanks for the two elegant numbers of "Picturesque California, Oregon Washington" etc. I should have long ere this written thanking your for the same, but business calling me from home several times since their receipt delayed my letter till this time. I loaned the numbers to the editor of the Tacoma Ledger to read. In a recent number of his paper your very interesting account of our ascent of the grand old mountain appears.[5]They reached the top between 4 and 5 o'clock, and had to stay all night in the crater. The next day they looked the worse for their [dreary?] vigil on the summit. Like other [tyros?], I think they thought to make the trip from lower snowline and back the same day I see by the papers you are contemplating soon another exploring trip to Alaska. Is there any chance of your coming this way? If you do come this route you must not fail to make me a visit. As if I knew that you would touch at some point on the Sound I would be there to see you if possible. If it wasn't for the sea voyage one has to endure (and a sea voyage nearly kills me) to reach that