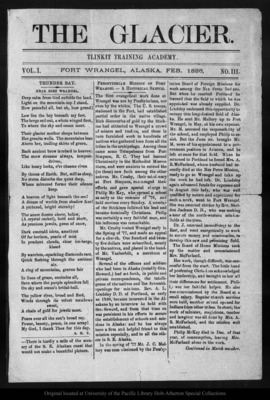 THE GLACIER.TLINKIT TRAINING ACADEMY.VOL.I FORT WRANGEL, ALASKA. FEB. 1886. NO.IIITHUNDER BAY.NEAR FORT WRANGEL.Deep calm from God enfolds the land. Light on the mountain-top I stand. How peaceful all, but ah, how grand!Low lies the bay beneath my feet. The bergs sail out, a white winged fleet, To where the sky and ocean meet.Their glacier mother sleeps between Her granite walls. The mountains lean Above her, trailing skirts of green.Each ancient brow is raised to heaven: The snow streams always, tempest-driven,Like hoary locks, o'er chasms rivenBy throes of Earth. But, still as sleep, No storm disturbs the quiet deep, Where mirrored forms their silence keep.A heaven of light beneath the sea! A dream of worlds from shadow free! A pictured, bright eternity!The azure domes above, below, (A crystal casket), hold and show, As precious jewels, gems of snow,Dark emerald islets, amethyst Of far horizon, pearls of mist In pendant clouds, clear ice-bergs, kissedBy wavelets,-sparkling diamonds rare, Quick flashing through the ambient air.A ring of mountains, graven fairIn lines of grape, encircles all, Save where the purple splendors fall On sky and ocean's bridal-hall.The yellow river, broad and fleet, Winds through its velvet meadows sweet,A chain of gold for jewels meet.Pours over all the sun's broad ray. Power, beauty, peace, in one array! My God, I thank Thee for this day.S. H. Y.-There is hardly a mile of the scenery of the S.E. Alaskan coast that would not make a beautiful picture.PRESBYTERIAN MISSION OF FORT WRANGEL - A HISTORICAL SKETCH.The first evangelical work done at Wrangel was not by Presbyterians, nor even by the whites. The U. S. troops, stationed in the Fort, had established partial order in the native village. Rich discoveries of gold up the Stickine had attracted to Wrangel a crowd of miners and traders, and these in turn furnished work to hundreds of natives who gathered here from all the tribes in the archipelago. Among them came some Tsimpsheans from Fort Simpson, B. C. They had learned Christianity in the Methodist Mission there, and were anxious to extend the (to them) new faith among the other natives. Mr. Crosby, their missionary at Fort Simpson, encouraged their efforts and gave special charge to Philip Mc Kay, who opened a school as early as the summer of' 76, and held services every Sunday. A number of the Stickines followed his lead and became nominally Christians. Philip was certainly a very faithful man, and his influence was remarkable.Mr. Crosby visited Wrangel early in the Spring of '77, and made an appeal for a church. One hundred and twenty five dollars were subscribed, mostly by the natives, and placed in the hand.-of Mr. Vanberbilt, a merchant of Wrangel.Several of the officers and soldiers who had been in Alaska (notably Gen. Howard,) had set forth, in public and private Correspondence, the intelligence of the natives and the fuvorable openings for missions. Rev. A. L. Lindsley D. D. of Portland, as early as 1869, became interested in the Alaskans by an interview he held with Sec. Seward, and from that time on was persistent in his efforts to secure the establishment of schools and missions in Alaska: and he has always been a firm and helpful friend to this mission especially, and to all the others in S. E. Alaska.In the spring of '77 Mr. J. C. Mallory was com missioned by the Presbyterian Board of Foreign Missions for work among the Nez Perce Indians. But when he reached Portland he learned that the field to which he was appointed was already supplied. Dr. Lindsley embraced this opportunity to occupy this long-desired field of Alaska. He sent Mr. Mallory up to Fort Wrangel, in May, at his own expense. Mr. M. assumed the responsibility of the school, and employed Philip to assist. But the June str. brought Mr. M. news of his appointment to a government position in Arizona, and he left at once for that field. When he returned to Portland he found Mrs. A. R. McFarland, whose husband had recently died at the Nez Perce Mission, ready to go to Wrangel and take up the work he had left. Dr. Lindsley again advanced funds for expenses and in August this lady, who was well qualified by nature and experience for such a work, went to Fort Wrangel. She was escorted thither by Rev. Sheldon Jackson D. D., who was making a tour of the north-western mission-fields at the time.Dr. J. returned immediately to the East, and went energetically to work to secure money and missionaries, to develop this new and promising field.The Board of Home Missions took up the matter and commissioned Mrs. McFarlapd.Her work, though difficult, was successful from the start. The little band of professing Christians acknowledged her leadership, and brought to her all their differences for settlement. Philip was her faithful helper. Ho also was commissioned by the Board at a small salary. Regular church services were held, another school opened for Indians from other tribes. In short, the work of minister, magistrate, teacher and lawgiver was all done by Mrs. A. R. McFarland, and the mission well established.Philip McKay died in Dec. of that year, of consumption, leaving Mrs. McFarland alone in the work.Continued in March number.