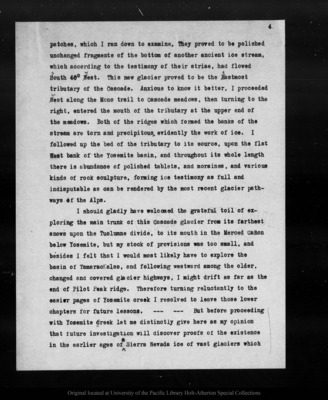 4.patches, which I ran down to examine. They proved to be polished unchanged fragments of the bottom of another ancient ice stream, which according to the testimony of their striae, had flowed south 40° west. This new glacier proved to be the eastmost tributary of the Cascade. Anxious to know it better, I proceeded west along the Mono trail to Cascade meadows, then turning to the right, entered the mouth of the tributary at the upper end of the meadows. Both of the ridges which formed the banks of the stream are torn and precipitous, evidently the work of ice. I followed up the bed of the tributary to its source, upon the flat West bank of the Yosemite basin, and throughout its whole length there is abundance of polished tablets, and moraines, and various kinds of rock sculpture, forming ice testimony as full and indisputable as can be rendered by the most recent glacier path-ways of the Alps.I should gladly have welcomed the grateful toil of exploring the main trunk of this Cascade glacier from its farthest snows upon the Tuolumne divide, to its mouth in the Merced Can~on below Yosemite, but my stock of provisions was too small, and besides I felt that I would most likely have to explore the basin of Tamarack also, and following westward among the older, changed and covered glacier highways, I might drift as far as the end of Pilot Peak ridge. Therefore turning reluctantly to the easier pages of Yosemite creek I resolved to leave those lower chapters for future lessons. --- --- But before proceeding with Yosemite Creek let me distinctly give here as my opinion that future investigation will discover proofs of the existence in the earlier ages of a Sierra Nevada ice of vast glaciers which