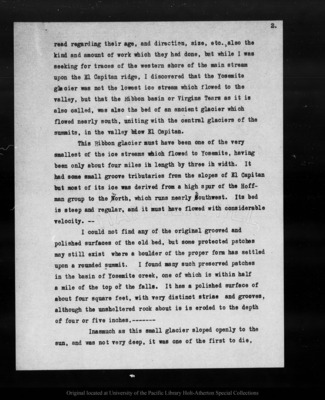 2.read regarding their age, and direction, size, etc., also the kind and amount of work which they had done, but while I was seeking for traces of the western shore of the main stream upon the El Capitan ridge, I discovered that the Yosemite glacier was not the lowest ice stream which flowed to the valley, but that the Ribbon basin or Virgins Tears as it is also called, was also the bed of an ancient glacier which flowed nearly south, uniting with the central glaciers of the summits, in the valley below El Capitan.This Ribbon glacier must have been one of the very smallest of the ice streams which flowed to Yosemite, having been only about four miles in length by three in width. It had some small groove tributaries from the slopes of El Capitan but most of its ice was derived from a high spur of the Hoffman group to the north, which runs nearly southwest. Its bed is steep and regular, and it must have flowed with considerable velocity. --I could not find any of the original grooved and polished surfaces of the old bed, but some protected patches may still exist where a boulder of the proper form has settled upon a rounded summit. I found many such preserved patches in the basin of Yosemite creek, one of which is within half a mile of the top of the falls. It has a polished surface of about four square feet, with very distinct striae and grooves, although the unsheltered rock about is is eroded to the depth of four or five inches.-------Inasmuch as this small glacier sloped openly to the sun, and was not very deep, it was one of the first to die,