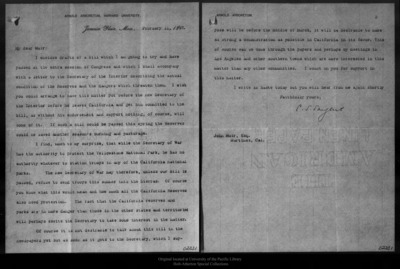 ARNOLD ARBORETUM, HARVARD UNIVERSITY. Jamaica Plain, Mass., February 11, 1897.My dear Muir: I enclose drafts of a Dill which I am going to try and have passed at the extra session of Congress and which I shall accompany with a letter to the Secretary of the Interior describing the actual condition of the Reserves and the dangers which threaten them. I wish you could arrange to have this matter put before the new Secretary of the Interior before he leaves California and get him committed to the bill, as without his endorsement and support nothing, of course, will come of it. If such a bill could be passed this spring the Reserves could be saved another season's burning and pasturage. I find, much to my surprise, that while the Secretary of War has the authority to protect the Yellowstone National Park, he has no authority whatever to station troops in any of the California national parks. The new Secretary of War may therefore, unless our bill is passed, refuse to send troops this summer into the Sierras. Of course you know what this would mean and how much all the California Reserves also need protection. The fact that the California reserves and parks are in more danger than those in the other states and territories will perhaps excite the Secretary to take some interest in the matter.Of course it is not desirable to talk about this bill in the newspapers yet out as soon as it gets to the Secretary, which I sup-ARNOLD ARBORETUM. 2pose will be before the middle of March, it will be desirable to make as strong a demonstration as possible in California in its favor. This of course can be done through the papers and perhaps by meetings in Los Angeles and other southern towns which are more interested in this matter than any other communities. I count on you for support in this matter. I write in haste today out you will hear from me again shortlyFaithfully yours, C. S. [illegible] John Muir, Esq. Martinez, Cal. 02231