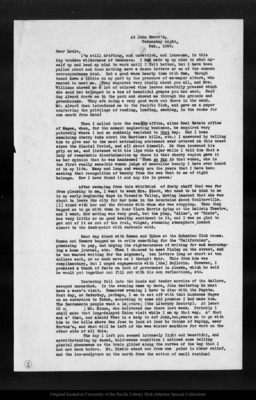 At John Swett's,Wednesday night,Feb.,1880.Dear Louie,I'm still drifting, and unsettled, and lonesome, in this big trodden wilderness of tameness.I had made up my mind to shut myself up and bend my mind to work until I felt better, but I have been pulled about and done nothing save a dozen letters or so of the common correspondence kind.Had a good warm hearty time with Sam, though toned down a little on my part by the presence of ex-mayor Alvord, who wanted to meet me.They enquired very kindly about you all, and Mrs. Williams showed me a lot of colored vine leaves carefully pressed which she said had belonged to a box of beautiful grapes you had sent. Next day Alvord drove me to the park and showed me through the grounds and greenhouses.They are doing a very good work out there in the sand. Mr. Alvord then introduced me to the Pacific Club, and gave me a paper conferring the privilege of reading, loafing, smoking, in the rooms for one month from date!Then I called into the realty office, alias Real Estate office of Magee, when, for the moment neglecting business, he enquired very pointedly where I had so suddenly vanished to that day.Had I been examining cherry buds about the Martinez hills, etc.? I answered by telling him to give ear to the most astounding statement ever uttered on this coast since the Glacial Period, and all about himself.He then loosened his grip on me, and listened with his lips wide ajar while I told him that a lady of remarkable discrimination up there in that cherry region gave it as her opinion that he was handsome! "Then go for that woman, she is the first really sensible woman judge of masculine beauty I have ever heard of in my life. Many and long and weary are the years that I have been seeking that recognition of beauty from the sex that to me of right belongs.Now I have found it and may die in peace."After escaping from this whirlwind of dusty chaff that was far from pleasing to me, I went to seek Mrs. Black, who used to be kind to me in my early beginning days in Yosemite Valley, having learned that she was about to leave the city for her home in the mountains about Coulterville. [I] dined with her and the friends with whom she was stopping.Then they begged me to go with them to hear Clara Morris dying at the Baldwin Theatre, and I went. Her acting was very good, but the play, "Alixe", or "Dixie", has very little or no good healthy sentiment in it, and I was as glad to get out of it as out of the foul, vulgar, steaming atmosphere, loaded almost to the dead-point with carbonic acid.Next day dined with Roman and Upham at the Bohemian Club rooms. Roman and Somers begged me to write something for the "Californian", promising to pay, and urging the righteousness of writing for and encouraging a home journal, etc.Then I chanced to meet Pixley on the street, and he too wanted writing for the Argonaut,ten letters long or short at ten dollars each, or as much more as I thought fair.This from him was complimentary, but I urged engagements with [the] Bulletin.However, I promised a bunch of facts on lack of government in Alaska, which he said he would put together and fill out with his own reflections, etc.Yesterday fell into the hands and tender mercies of the tailors, escaped unscathed.In the evening came up here, John declaring he must have a week's visit.Tomorrow evening I have to dine with the Payots. Next day, or Saturday, perhaps, I am to set off with that handsome Magee on an excursion to Tahoe, according to some old promise I had made him. The Sacramento people want a le[cture] (the Literary Society).At least 20 s[ ] Mr. Minus, who delivered one there last week.Probably I shall make that long-delayed Chico visit while I am up that way.A' that and a' that, and alack ! What is a body to do? John, too, wants me to go with him to the hills above San Jose to look at land he thinks of buying, near Norton's, and what will be left of the wee winter monthies for work on the other side of all this.The day I left you seemed intensely light and beautiful, and notwithstanding my dazed, half-awake condition I noticed some telling glacial phenomena as the train glided along the curves of the bay that I had not seen before.Mt. Diablo stood out from one point in clear relief, and the ice-sculpture on the north from the action of small residual