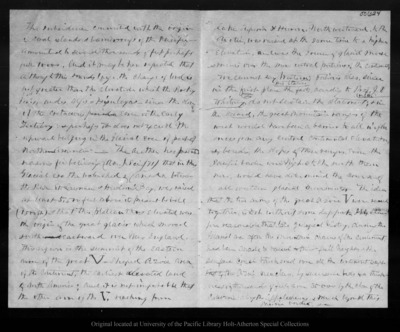 The subsidence connected with the origin of coral islands & barrier reefs of the Pacific - amounted to several thousands of feet perhaps full 10,000, And it may be here repeated that although this sounds large the change of level is not greater than the elevation which the Rocky Mtns, Andes, Alps & Himalayas - since the close of the cretaceous era or the early Tertiary; & perhaps it does not exceed the upward bulging in the Glacial era of part of North America. - The author has presented reasons for believing (Am. J. Sci. /71) that in the Glacial era the watershed of Canada between the River St. Lawrence & Hudson's Bay was raised at least 5,500 feet above its present level (1500 ft) & that this plateau thus elevated was the origin of the great glacier which moved south eastward over New England. This region is the summit of the Eastern arm of the great V-shaped azoic area of the continent, the earliest elevated land of North America; and it is not improbable that the other arm of the V, reaching from 00624Lake Superior & Huron Northwestward, to the Arctic, was raised at the same time to a higher elevation, and was the source of glacial move -ments over the more central portions of the continent. We cannot say Western portions also, since [in margin: his italics] in the first place the facts, according to Prof. J. D [in margin: illegible] Whitney, do not sustain the statement; & in the second, the great mountain ranges of the west would have been a barrier to all influ ences from any central continental elevation, &, besides, the slopes of these ranges, even the Pacific border were higher to the north then now, would have determined the course of all western glacial movements. The idea that the two arms of the great azoic V were raised together, is not without some support. It is there- fore reasonable that late geological history, during the Glacial era after the Mountain chains of the continent had been made & raised to their full height, & the surface crust thickened over all the continent except that of the Azoic nucleus, by successive beds to a thick- ness of thousands of feet, even 35000 by the close of the Paleozioic along the Appalachians, & much beyond this Pacific border, &c