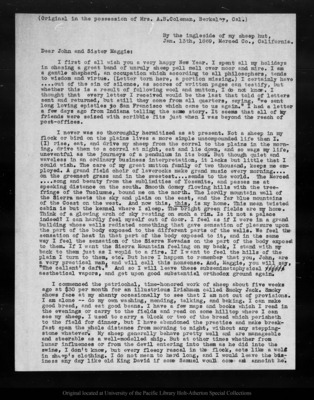 (Original in the possession of Mrs. A.B.Coleman, Berkeley, Cal.)By the ingleside of my sheep hut,Jan. 13th, 1869, Merced Co., California.Dear John and Sister Maggie:I first of all wish you a very happy New Year. I spent all my holidays in chasing a great band of unruly sheep pell mell over moor and mire. I am a gentle shepherd, an occupation which according to all philosophers, tends to wisdom and virtue. (Letter torn here, a portion missing.) I certainly have....out of the sin of silence, as scores of written pages can testify, but whether this is a result of following wool and mutton, I do not know. I thought that every letter I received would be the last that told of letters sent and returned, but still they come from all quarters, saying, "we sent long loving epistles to San Francisco which came to us again." I had a letter a few days ago from Indiana telling the same story. It seems that all of my friends were seized with scribble fits just when I was beyond the reach of post-offices.I never was so thoroughly hermitized as at present. Not a sheep in my flock or bird on the plains lives a more simple uncompounded life than I.(I) rise, eat, and drive my sheep from the corral to the plains in the morning, drive them to a corral at night, eat and lie down, and so wags my life, uneventful as the journeys of a pendulum in its box. But though quiet and waveless in an ordinary business interpretation, it lacks but little that I could wish. The care of my great mutton family of two thousand, keeps me employed. A grand field choir of laverocks make grand music every morning....on the greenest grass and in the sweetest....sends to the world. The Merced....song and beauty from the sublimities of Yosemite, and passes me at speaking distance on the south. Smooth domey flowing hills with the tree-fringe of the Tuolumne, bound me on the north. The lordly mountain wall of the Sierra meets the sky and plain on the east, and the far blue mountains of the Coast on the west. And now this, this, is my home. This mean twisted cabin is but the kennel where I sleep. The bright green fields are my home. Think of a glowing arch of sky resting on such a rim. Is it not a palace indeed? I can hardly feel myself out of door. I feel as if I were in a grand building whose walls radiated something that gave sensation of pleasure upon the part of the body exposed to the different parts of the walls. We feel the sensation of heat in that part of the body exposed to it, and in the same way I feel the sensation of the Sierra Nevadas on the part of the body exposed to them. If I want the Sierra Mountain feeling on my back, I stand with my back to them just as I would to a fire. If I want to feel the hills of the plain I turn to them, etc. But here I happen to remember that you, John, are a very practical man, and will call this nonsense. And, Maggie, you will say, "The callant's daft." And so I will leave these subsemimetaphysical aesthetical vapors, and get upon good substantial orthodox ground again.I commenced the patriochal, time-honored work of sheep about five weeks ago at $30 per month for an illustrious Irishman called Smoky Jack. Smoky shows face at my shanty occasionally to see that I am not out of provisions. I am alone--do my own washing, mending, talking, and baking. I can make good bread, and eat good beans. I have a few maps and books which I read in the evenings or carry to the fields and read on some hilltop where I can see my sheep. I used to carry a block or two of the bread which perisheth to the field for dinner, but I have abandoned the practice and make breakfast span the whole distance from morning to night, without any stepping-stone whatever. My sheep generally behave pretty well and are manageable and steerable as a well-modelled ship. But at other times whether from lunar influences or from the devil entering into them as he did into the swine, I don't know, but every fleecy rascal in the flock, acts like a wolf in sheep's clothing. I do not mean to herd long, and I would leave the business any day like old King David if some Samuel would come and annoint he.