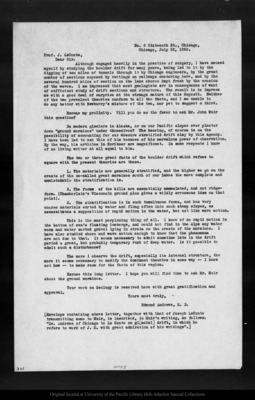 No. 6 Sixteenth St., Chicago, Chicago, July 23, I880.Prof. J. LeConte, Dear Sir:Although engaged heavily in the practice of surgery, I have amused myself by studying the boulder drift for many years, being led to it by the digging of ten miles of tunnels through it by Chicago engineers, by the great number of sections exposed by cuttings on railways centering here, and by the several hundred miles of section on the lake shores kept fresh by the erosion of the waves. I am impressed that most geologists err in consequence of want of sufficient study of drift sections and structure. The result is to impress me with a good deal of surprise at the strange nature of this deposit. Neither of the two prevalent theories conform to all the facts, and I am unable to do any better with Newberry's mixture of the two, nor yet to suggest a third.Excuse my prolixity. Will you do me the favor to ask Mr. John Muir this question?Do modern glaciers in Alaska, or on our Pacific slopes ever plaster down "ground moraines" under themselves? The bearing, of course is on the possibility of accounting for our obscure stratified drift clay by this agency. I have been led to ask this of him because of his marvelous power of observation. By the way, his articles in Scribner are magnificent. In some respects I know of no living writer at all equal to him.The two or three great facts of the boulder drift which refuse to square with the present theories are these.1. The materials are generally stratified, and the higher we go on the crests of the so-called great moraines south of our lakes the more complete and unmistakable the stratification is.2. The forms of the hills are essentially mammelated, and not ridge-form. (Chamberlain's Wisconsin ground plan gives a wildly erroneous idea on that point).3. The stratification is in such tumultuous forms, and has very coarse materials sorted by water and flung often into such steep slopes, as necessitates a supposition of rapid motion in the water, but not like wave action.This is the most perplexing thing of all. I know of no rapid motion in the bottom of sea's floating icebergs, and could not find in the Alps any water worn and water sorted gravel lying in strata on the crests of the moraines. I have also studied shore and wave action enough to know that the phenomena are not due to that. It seems necessary to admit sometime late in the drift period a great, but probably temporary rush of deep water. Is it possible to admit such a disturbance?The more I observe the drift, especially its internal structure, the more it seems necessary to modify the dominant theories in some way -- I know not how -- to make room for the facts of this region.Excuse this long letter. I hope you will find time to ask Mr. Muir about the ground moraines.Your work on Geology is received here with great gratification and approval.Yours most truly,Edmund Andrews, M. D.[Envelope containing above letter, together with that of Joseph LeConte transmitting same to Muir, is inscribed, in Muir's writing, as follows: "Dr. Andrews of Chicago to Le Conte on gl[acial] drift, in which he refers to work of J. M. with great admiration of his writings".]32100953