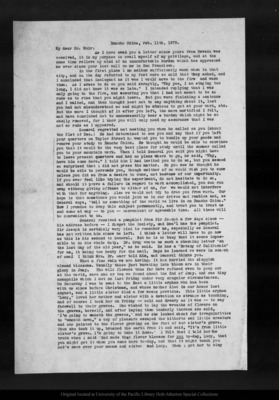 Rancho Chico, Feb. 11th, 1879.My dear Mr. Muir:As I have owed you a letter since yours from Nevada was received, it is my purpose to avail myself of my privilege, and at the same time relieve my mind of an uncomfortable burden which has oppressed me ever since your last call on me in San Francisco.In the first place I am seldom sufficiently warm when in that city, and on the day referred to my feet were so cold that they ached, and I concluded that inelegant as it was I would move to the fire and warm them. As I arose to do so you said abruptly, "Why yes, I am staying too long, I did not know it was so late." I intended replying that I was only going to the fire, and assuring you that I had not meant to be so rude as to rise that you might leave. But you were finishing a sentence and I waited, and then thought best not to say anything about it, lest you had not misunderstood me and might be anxious to get at your work, etc. But the more I thought of it after you left, the more mortified I felt, and have concluded not to unnecessarily bear a burden which might be so easily removed, for I know you will only need my assurance that I was not so rude as I appeared.General regretted not meeting you when he called on you (about the 31st of Dec.) He had determined to see you and say that if you left your quarters on Taylor Street he wanted you to bundle up your goods and remove your study to Rancho Chico. He thought he would be able to convince you that it would be the very best place for study until the summer called you to your mountain work. When I told General you said you might have to leave present quarters and had no plans where to go, he said, "Why, have him come here." I told him I had invited you to do so, but you seemed so surprised that I did not press the matter. So you see he thought he would be able to persuade you, though neither of us would wish you to come unless you did so from a desire to come, not because of our importunity. If you ever feel like trying the experiment, do not hesitate to do so, and should it prove a failure in regard to work accomplished, you can run away withoug giving offense to either of us, for we would not interfere with that for anything. Also we would not try to draw you from work. Our hope is that sometimes you would join us in our drives and rambles and, as General says, "tell us something of the world we live in on Rancho Chico." Now I promise to drop this subject permanently, and trust you to trust us and come at any - to you - convenient or agreeable time. All times will be convenient to us.General received a pamphlet from Sir Joseph a few days since - his address before - I forget the Society, and Gen'l has the pamphlet. Sir Joseph is certainly very kind to remember us, especially as General has not written him since he left. I think a letter will have to go now as this is his second to General. But he is so busy that it seems impossible to do his whole duty. Dr. Gray wrote us such a charming letter "on the last day of the old year," as he said. He has a "Botany of California" for us, it being too heavy for the mail. Says he learned we were in search of one ! I think Mrs. Dr. Carr told him, and General thinks you.What a fine rain we are having. It has hurried the sluggish almond blossoms. Usually those just bursting into bloom are in their glory in Jany. The wild flowers thus far have refused even to peep out at the world, save one or two we found about the 2nd of Jany. and one tiny nemophila which I met on last Friday under very singular circumstances. On Saturday I was to send to the East a little orphan who has been with us since before Christmas, and whose mother died in our house last August, and a little sister died a few weeks previous. This little orphan "Lucy," loved her mother and sister with a devotion as strange as touching, and of course I took her on Friday - cold and dreary as it was - to say farewell to their graves. She wished to lay the wreaths of flowers on the graves, herself, and after laying them tenderly thereon she said, "I'm going to smooth the graves," and as she looked about for irregularities to "smooth down," a cry of pleasure escaped the hitherto sad little creature and she pointed to the flower growing on the foot of her sister's grave. Then she took it up, brushed the earth from it and said, "It's from little sister's grave. I'm going to take it home." I felt that I told her the truth when I said "God made that flower blossom for you to-day, Lucy, that you might get it when you came here to-day, and that it might teach you God's care over your mamma and sister and Lucy. Then I got her to sing