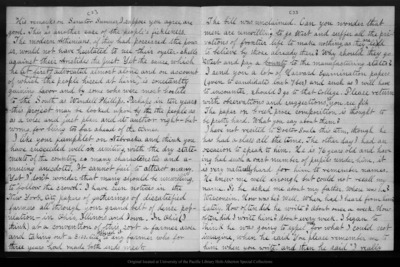 [2] His remarks on Senator Summer, I suppose you agree, are good. This is another case of the people's fickleness. The modern Athenians, if they had possessed the pow- er, would not have hesitated to use their oyster-shells against their Aristides the just. Yet the cause, which he [circled: at first] advocated almost alone and on account of which the people hissed at him, is constantly gaining favor and by some who were most hostile to the South as Wendell Phillips. perhaps in ten years this project may be looked upon by the the people as as a wise and just plan and its author right-but wrong, for being too far ahead of the times. I like your pamphlet on Nebraska and think you have succeeded well in uniting, with the dry state- ments of the country, so many characteristics and a- musing anecdotes. It cannot fail to attract many. Yet I don't wonder that many should be unwilling to "follow the crowd". I have seen notices in the New York City papers of gatherings of dissatisfied farmers all through your grand belt of dense pop- ulation - in Ohio, Illinois, and Iowa. In Ohio (I think) at a convention of this sort a farmer arose and taking out a $100. bill offered it to any farmer who for three years had made both ends meet. [3]The bill was unclaimed. Can you wonder that men are unwilling to go West and suffer all the pri- vations of frontier life to make nothing, as they are led to believe by those already there? Why should they go West and pay a [underlined: bounty] to the manufacturing states? I send you a lot of Harvard Examination papers (given to candidates last [illegible] ber) and such as I will have to encounter, should I go to that College. Please return with observations and suggestions as you see fit. The paper on Greek prose composition is thought to be pretty hard. What you say about them? I have not recited to Doctor Soule this term, though he has had a class all the time. The other day I had an occasion to speak to him. He is 76 years old and hav- ing had such a vast number of pupils under him, it is very naturally hard for him to remember names. He knew me well enough but could not recall my name. So he asked me about my father. Where was he? Wisconsin. How was he? Well. When had I heard from him? Lately. How often did he write? About once a week. How often did I write him? About every week. I began to think he was going to expel me for what I could not imagine, when he said "You please remember me to him when you write". And then he said "I really