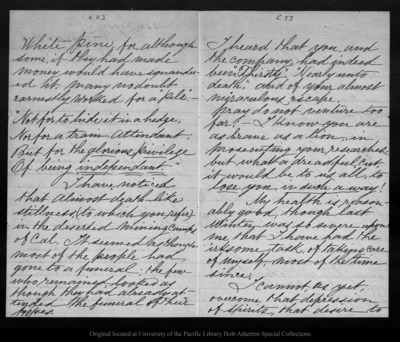 [2]White pine, for, although some, if they had made money would have squander- ed it, many no doubt earnestly worked for a “pile”: — “Not for to hide it in a hedge, Nor for a train Attendant; But for the [underlined: glorious privilege] Of being [underlined independent..”] I have noticed that almost death-like stillness, (to which you refer)- in the deserted mining camps of Cal. It seemed as though most of the people had gone to a funeral; the few who remained, looked as though they had already at- tended the funeral of their hopes. [3]I heard that you, and the company, had indeed been “Thirsty” “Nearly unto death”, and of your almost miraculous escape, pray do not venture too far; — I know you are as brave as a lion, in prosecuting your researches, but what a dreadful cut, it would be to us all, to [underlined: lose] you [underlined: in such a way!] My health is reason- ably good, though last Winter was so severe upon me that I have had the irksome task, of taking care of myself, most of the time since. I cannot, as yet, overcome that depression of Spirits, that desire to