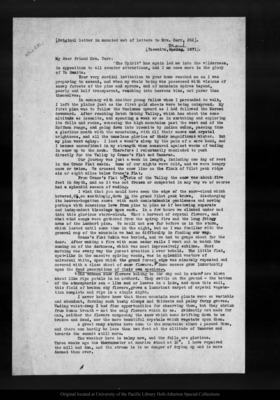 [Original letter in mounted set of letters to Mrs. Carr. #52].[Yosemite, March, 1871].My dear friend Mrs. Carr:"The Spirit" has again led me into the wilderness, in opposition to all counter attractions, and I am once more in the glory of Yo Semite.Your very cordial invitation to your home reached me as I was preparing to ascend, and when my whole being was possessed with visions of snowy forests of the pine and spruce, and of mountain spires beyond, pearly and half transparent, reaching into heavens blue, not purer than themselves.In company with another young fellow whom I persuaded to walk, I left the plains just as the first gold sheets were being outspread. My first plan was to follow the Tuolumne upward as I had followed the Merced downward. After reaching Hetch He tchy Valley, which has about the same altitude as Yosemite, and spending a week or so in sketching and exploring its falls and rocks, crossing the high mountains past the west end of the Hoffman range, and going down into Yosemite by Indian cañon, passing thus a glorious month with the mountains, with all their snows and crystal brightness, and all the nameless glories of their magnificent winter. But my plan went agley. I lost a week's sleep by the pain of a sore hand, and I became unconfident in my strength when measured against weeks of wading in snow up to the neck. Therefore I reluctantly concluded to push directly for the Valley by Crane's Flat and Tamarac.Our journey was just a week in length, including one day of rest in the Crane Flat cabin. Some of our nights were cold, and we were hungry once or twice. We crossed the snow line on the flank of Pilot peak ridge six or eight miles below Crane's Flat.From Crane's Flat to the brim of the Valley the snow was about five feet in depth, and as it was not frozen or compacted in any way we of course had a splendid season of wading.I wish that you could have seen the edge of the snow-cloud which hovered, Oh, so soothingly,down to the grand Pilot peak brows, discharging its heaven-begotten snows with such unmistakeable gentleness and moving perhaps with conscious love from pine to pine as if bestowing separate and independent blessings upon each. In a few hours we climbed under and into this glorious storm-cloud. What a harvest of crystal flowers, and what wind songs were gathered from the spirey firs and the long fringy arms of the Lambort pine. We could not see far before us in the storm, which lasted until some time in the night, but as I was familiar with the general map of the mountain we had no difficulty in finding our way.Crane's Flat Cabin was buried, and we had to grope about for the door. After making a fire with some cedar rails I went out to watch the coming on of the darkness, which was most impressively sublime. Next morning was every way the purest creation I ever beheld. The little flat, spot-like in the massive spiring woods, was in splendid vesture of universal white, upon which the grand forest edge was minutely repeated and covered with a close sheet of snow flowers. Some mosses grow luxuriantly upon the dead generations of their own species. The common snow flowers belong to the sky and in storms are blown about like ripe petals in an orchard. They settle on the ground - the bottom of the atmospheric sea - like mud or leaves in a lake, and upon this soil, this field of broken sky flowers,grows a luxuriant carpet of crystal vegetation complete and ripe in a single night.I never before knew that these mountain snow plants were so variable and abundant, forming such bushy clumps and thickets and palmy ferny groves. Wading waist-deep I had fine opportunities for observing them, but they shrink from human breath - not the only flowers which do so. Evidently not made for man, neither the flowers composing the snow which came drifting down to us broken and dead, nor the more beautiful crystals which vegetate upon them.A great many storms have come to the mountains since I passed them, and there can hardly be less than ten feet at the altitude of Tamarac and towards the summit still more.The weather here is balmy now, and the falls are glorious. Three weeks ago the thermometer at sunrise stood at 12°. I have repaired the mill and dam, and the stream is in no danger of drying up and is more dammed than ever.