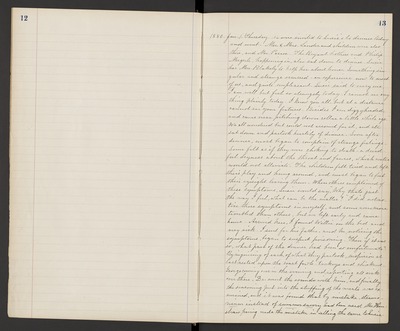 1880 - Jan. 1. Thursday. We were invited to Susie's to dinner today and went. Mr. & Mrs. Lander and children were also there, and Mr. Pascoe. The Bryant brothers and Philip Megerle, happening in, also sat down to dinner. Susie has Mrs. Blakely to help her about house. Something singular and strange occurred - an experience new to most of us, and quite unpleasant. Susie said to every one, I am well but feel so strangely today. I cannot see anything plainly today. I know you all, but at a distance cannot see your features. Besides I am dizzy headed and came near pitching down cellar a little while ago. We all wondered but could not account for it, and all sat down and partook heartily of dinner. Soon after dinner, most began to complain of strange feelings. Some felt as if they were choking to death - a dreadful dryness about the throat and fauces, which water would not alleviate. The children felt tired and left their play and hung around, and most began to feel their eyesight leaving them. When others complained of these symptoms, Susie would say, "Why that's just the way I feel, what can be the matter?" I did not notice these symptoms in myself, and some were more troubled than others, but we left early and came home. Arrived here, I found Willie on the bed and very sick. I sent for his father, and he noticing the symptoms, began to suspect poisoning. Then if it was so, what part of the dinner had been so unfortunate? By inquiring of each of what they partook, suspicion at last rested upon the roast fowls - turkeys and chickens. George coming over in the evening and reporting all sick over there, Dr. want the rounds with him, and finally the seasoning put into the stuffing of the meats was examined, and it was found that by mistake, stramonium instead of summer savory had been used. Mr. Hemshaw having made the mistake in selling the same to Susie.