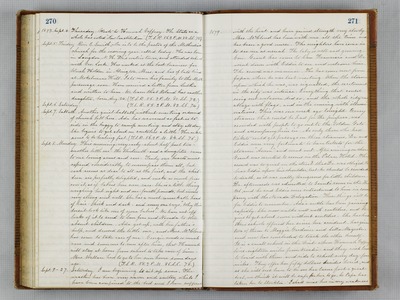 1879. Sept. 4. Thursday. Wrote to Hannah Geffroy. The State as a whole has voted "New Constitution." (T.S.R. 56. 2 P.M. 88. S.S. 78.) Sept. 5. Friday. Rev. E. Smith, who is to be the pastor of the Methodist church for the ensuring year, called today. He was born in Langdon, N. H. Dr.'s native town, and attended school with Geo. Locke. Has worked at the boot business for Uncle Holden in Abington, Mass. and has of late lived at Mokelumne Hill. Is to move his family to the Meth parsonage soon. Have received a letter from Luther and written to him. We learn that Roland has another daughter, born Aug. 24. (T.S.R. 56. 2 P.M. 80. S.S. 72.) Sept. 6. Saturday. (T.S.R. 55. 2 P.M. 82. S.S. 74.) Sept. 7. Sabbath. Another quiet Sabbath, without meeting or sound of church bell here. Ada has recovered so fast as to ride in the buggy to camp meeting and stay all day. She begins to get about on crutches a little. Her ankle seems to be healing fast. (T.S.R. 56. 2 P.M. 84. S.S. 76.) Sept. 8. Monday. This morning, very early - about half past two another little one - the thirteenth - and a daughter - came to our loving arms and care. Truly our hearts must expand considerably to encompass them all, but each seems as dear to all as the first, and the children are perfectly delighted, and make as much fuss over it, as if babies here were rare. She is a little thing weighing but eight and one - fourth pounds, but seems very strong and well. She has a most remarkable head of hair - thick and dark - and every one says, "Why this doesn't look like one of your babies." We have cut off locks of it to send to San Jose and Nevada to the absent children. Ada got up, with her father's help, and dressed the little one, and Mrs. McCloud has come to take care of me. Georgic needs so much care and some one to run after him, that Hannah will stay at home from school to take care of him. Mrs. Wallace had to go to her own home some days ago. (T.S.R. 58. 2 P.M. 86. S.S. 78.) Sept. 9 - 27. Saturday. I am beginning to sit up some. The weather has been very warm and sultry while I have been confined to the bed and I have suffered 1879. with the heat and have gained strength very slowly. Mrs. McCloud has been with me all the time and has been a good nurse. The neighbors have come in to see me as usual. The baby is well and growing. Gen. Grant has come to San Francisco and Dr. went down with Eddie to see and welcome him. The crowd was immense. He has come now from Japan where he was last visiting. When the steamer upon which he was, was signalled, the excitement in the city was intense. Everything that could ring out welcome, did so, and the whole city was ablaze with flags, and in the evening with illuminations. This was one week ago tonight. Every steamer that could be had for the purpose, was crowded with people to go out to the Golden Gate and accompany him in. As only those who had tickets could get passage on these steamers, Dr. and Eddie were very fortunate to have tickets for the steamer "Ancon" and went out. After arriving on shore Grant was escorted to rooms in the Palace Hotel. The crowd was so great on the street that Dr. was obliged to bear Eddie upon his shoulder, lest he should be crowded to death, as it was really dangerous for little children. Dr. afterward was admitted to Grant's room in the Hotel, and he and Eddie were introduced to him in company with the Nevada Delegation. These things will be for Eddie to remember. Ada's ankle has been gaining rapidly. She now walks well with crutches, and begins to get about some without crutches. She has had three schools offered her since her accident, has given two of them to Maggie Gardiner and Setta Megerle, and now has concluded to teach the other herself. It is a small school in the Dist. where Hannah Geffroy lives - eighteen miles from Visalia - and they wish her to board with them and ride to school every day - four miles. They offer her fifty dollars besides board, and as she will not have to be on her lame fool a great deal, we think it will be safe for her to go. So Papa has taken her to Stockton. I shall miss her in my weakness