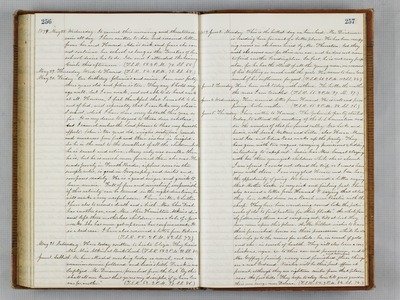 1879. May 28. Wednesday. It rained this morning and threatened rain all day. I have written to Ada and received letters from her and Howard. Ada is sick, and fears she cannot continue her school as long as the Trustees of her school desire her to do. Ida and I attended the Sewing Circle this afternoon. (T.S.R. 58. 2 P.M. 70. S.S. 66.) May 29. Thursday. Wrote to Howard. (T.S.R. 54. 2 P.M. 75. S.S. 68.) May 30. Friday. Our birthday- Johnnie's and mine. I am now forty. three years old and John is ten. They say I hold my age well, but I am weak, and not able to do hard work at all. However, I feel thankful that I am able to be out of bed, and especially that I can take my class in S. school, which I have done every Sabbath this year so far. It is my desire to do good to those dear scholars, but I cannot unless the Lord pleases to bless my humble efforts. John is ten years old, weighs sixty four pounds and measures four feet and three inches in height. So he is the next to the smallest of all the children, but he is smart and active. Mary only was smaller than he is, but he is much more forward than she was. He reads poorly in Fourth Reader, ciphers some in the simple rules, is good in Geography, and writes and composes readily. He is a good singer and quick to learn music. Full of fun and mischief, "irrepressible," if this activity can be turned in the right direction, he will make a very useful man. I have written to Luther. I have also to record a death and a birth. Mrs. Chas. Dial has another son, and Mrs. Alice Hamilton Atkins died and left three motherless children - one a babe of a few weeks. She has never got up since her confinement. It is a sad case. I have also received a letter from Rebecca (T.S.R. 55. 2 P.M. 83. S.S. 77.) May 31. Saturday. Have today written to Sister Eliza. They buried Mrs. Alice Atkins at Brick Church. (T.S.R. 58. 2 P.M. 91. S.S. 81.) June 1. Sabbath. We have attended meeting today as usual, and communion service followed and Susie's little Frank's was Baptized. Mr. Dinsmore preached from the text. "By this shall all men know that ye are my disciples, if ye have love one for another." (T.S.R. 62. 2 P.M. 97. S.S. 86.) 1879. June 2. Monday. This is the hottest day we have had. Mr. Dinsmore is boarding here, for want of a better place. He has been occupying rooms in the house hired by Mr. Thurston, but they wish the rooms now for their own use, and he does not seem to find another boarding place. In fact, he is not very popular, for he has the ill will of all the young men, on account of his trifling so much with the girls. He seems to have lost much of his influence for good. (T.S.R. 66. 2 P.M. 103. S.S. 88.) June 3. Tuesday. Have been sick today with asthma. The hotter the weather the more I am troubled. (T.S.R. 66. 2 P.M. 97. S.S. 87.) June 4. Wednesday. Have received letter from Howard. He is well and prospering. Cooler weather. (T.S.R. 65. 2 P.M. 88. S.S. 76.) June 5. Thursday. I have written to Howard. The YoSemite party started today, to attend the meeting of the S.S. Convention and see the wonders of that far famed valley. Geo. Locke and Susie, with Sarah, Wallace and Lilla, also Horace Mann and Ida and Edna Ross make up the party. They have gone with two wagons, carrying provisions & bedding intending to "camp out." Susie has Mrs. Smart staying with her three youngest children while she is absent. I am afraid I could not stand the trip or I would have gone with them. I am very glad Horace and Ida have the opportunity of going. We have received a letter saying that Mother Locke is very sick and failing fast. I have also received a letter from Hannah G. saying that at last they have settled down on a Ranch near Visalia with the sheep. They have been wandering round like the patriarchs of old "to find pasture for their flocks," the whole family following them and camping out, till at last they have come upon this place. A Mr. Gilbert wishes to leave their furnished house in their possession while he and his wife go to the mines for awhile - he, in search of gold and she - in search of health. They will also leave a cow, chickens, organ, etc. to their use and possession, and to Mr. Geffroy's family, weary and famished, and homeless these things are a real Godsend. Visalia will be their post - office at present, although they are eighteen miles from that place, near the foot hills. They hope to stay here till grass grows on their own range near Delans. (T.S.R. 55. 2 P.M. 84. S.S. 74.)