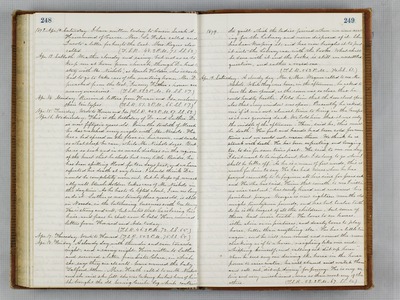 1879. Apr. 12. Saturday. I have written today to Cousin Sarah A. Hammond of Carver. Mrs. Le Faber called and I wrote a letter for her to the East. Mrs. Rogers also called. (T.S.R. 48. 2 P.M. 71. S.S. 62.) Apr. 13. Sabbath. Weather cloudy and rainy, but not so as to keep me at home from church, though Dr. had to stay with Mr. Nichols', as Uncle Holden, who is sexton had to go to take care of the meeting house. Mr. D. preached from the text, "In my Father's house are many mansions." (T.S.R. 53. 2 P.M. 60. S.S. 57.) Apr. 14. Monday. Received letters from Horace and Ida, enclosing their tin types. (T.S.R. 51. 2 P.M. 66. S.S. 57.) Apr. 15. Tuesday. Wrote to Horace and Ida. (T.S.R. 44. 2 P.M. 67. S.S. 62.) Apr. 16. Wednesday. This is the birthday of Dr. and Luther. Dr. is now fifty six years old. Since the twelvth of March he has watched every night with Mr. Nichols. He has a bed spread on the floor in his room, and swatches what sleep he can, while Mr. Nichols dozes. But he is so sick and in so much distress in the region of the heart that he sleeps but very little. Besides, he has been spitting blood for ten days past, and we have expected his death at any time. I should think Dr. would be completely worn out, but he keeps up remark ably well. Uncle Holden takes care of Mr. Nichols in the day time. As he has to be lifted about, I can no longer do it. Luther is now twenty three years old, is still in Nevada, in the butchering business with Geo. Mowry He is strong and well, but writes that he is losing his hair, and fears he shall soon be bald. Have received letters from Howard and Ada today. (T.S.R. 46. 2 P.M. 72. S.S. 65.) Apr. 17. Thursday. Wrote to Howard. (T.S.R. 50. 2 P.M. 75. S.S. 68.) Apr. 18. Friday. A cloudy day, with thunder and rain towards night, and a rainy night. Have written to Luther and received a letter from Sister Clara, in which she says they are all well - have warned the baby Talford Allen. Mrs. Heath called to see Mr. Nichols and she said she felt she was taking her last leave of him she brought the old Sewing Circle bag which continues 1879. the quilt which the ladies priced when we were sewing for the Library and never disposed of it. She has been keeping it, and has now brought it to put it into the Library case with the books. What shall be done with it and the books, is still an unsettled question, and rather a vexed one. (T.S.R. 56. 2 P.M. 74. S.S. 61.) Apr. 19. Saturday. A cloudy day. Mr. & Mrs. Wagner called to see Mr. Nichols. While they were here, in the afternoon, he asked to have the door opened, as the room was so close that he could hardly breathe. I told him that the door stood open also that every window was open. Presently he asked me if it was not almost time to bring in the lamps as it was growing dark. We told him that it was only the middle of the afternoon. "Then", said he, "this must be death." His feet and hands had been cold for some time and we could not warm them. We think he is struck with death. He has been expecting and longing, too, to die for some time past. He said to me one day, "I don't want to be impatient, but I do long to go where I shall be better off." As he is a man of few words, this is much for him to say. He has had times when he has prayed earnestly to be forgiven all his sins for Jesus sake and He who has said, "Him that cometh to me I will in no wise cast out," has surely heard and answered his penitent prayer. Georgie is now eighteen months old weighs twenty seven pounds, and has but twelve teeth. So he is the largest of all the children, but some of them had more teeth. He loves to see horses, either alive or in pictures, and dearly loves to play horse, better than anything else. He has a little time wagon, and he will seen round and round the room clucking as if to a horse, neighing like one and whipping himself, and calling out "dit up, horse." When he sees any one driving the horse in the horse power to raise water, he will stand and watch them and call out, "dit up, dinny" for Jenny. He is very active and very mischievous, more so than most any of the others. (T.S.R. 53. 2 P.M. 67. S.S. 60.)