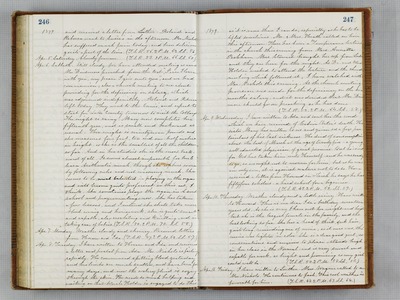 1879. and received a letter from Luther. Roland and Rebecca went to Susie's in the afternoon. Mr. Nichols has suffered much pain today, and been delirious quite a part of the time. (T.S.R. 56. 2 P.M. 62. S.S. 56.) Apr. 5. Saturday. Cloudy forenoon. (T.S.R. 53. 2 P.M. 66. S.S. 60.) Apr. 6. Sabbath. Still cloudy. We have attended meeting as usual Mr. Dinsmore preached from the text, " Peace I leave with you, my peace I give unto you", and we had communion, also a church meeting to see about providing for the deficiency on salary, which was adjourned indefinitely. Roland and Rebecca left today. They went to Mr. Ennis, and expect to start for Lake County tomorrow to visit the Colbaugh. The night is rainy. Mary now completes her fifteenth year, and is small and backward as usual. Her weight is ninety seven pounds and she measures four feet, ten and one - half inches in height. So she is the smallest of all the children so far. And in her studies she is the most backward of all. It seems almost impossible for her to learn Arithmetic much, though she ciphers some by following rules and not reasoning much. She seems to be most talented in playing on the organ and will become quite proficient in this art, I think. She sometimes plays the organ in S rend. school and prayer meeting now. She has taken a few lessons, and I intend she shall take more. About sewing and housework, she is quite smart and capable, also crocheting and knitting, and in taking care of babies. (T.S.R. 50. 2 P.M. 70. S.S. 58.) Apr. 7. Monday. Weather cloudy and showery. Received letters from Horace and Ida. (T.S.R. 47. 2 P.M. 62. S.S. 57.) Apr. 8. Tuesday. I have written to Horace and Ida and received a letter and postal from Ada. Mr. Nichols is failing rapidly. He commenced spitting blood yesterday and his limbs are much swollen, and have been for many days, and now the watery blind is oozing through the skin. He needs so much helping and waiting on that Uncle Holden is engaged to do this 1879. as it is more than I can do, especially as he has to be lifted sometimes. Mr. & Mrs. Heath called on him this afternoon. There has been a Temperance lecture in the church this evening from Mrs. Annetta Pechham. Mrs. Stewart brought her up from Lodi and they are here for the night. As Dr. and Uncle Holden wished to attend the lecture and the church meeting which followed it, I have watched with Mr. Nichols this evening. At the church meeting provision was made for the deficiency on the six month's salary, and it was decided that Mr. Dinsmore should go on preaching as he has done. (T.S.R. 52. 2 P.M. 64. S.S. 58.) Apr. 9. Wednesday. I have written to Ada and sent her the word which we have received, of Calvin Porter's death. His sister Mary has written to us and given us a few particulars of his last sickness. He died of consumption about the last of March at the age of twenty five a young well-educated physician, of great promise. But he is not for God has taken him unto Himself and he was ready to go, so we ought not to mourn for him, but as he was an only son, it is against mature not to do so. Have received a letter from Howard in which he says he has fifty four scholars - a hard school for a beginner. (T.S.R. 43. 2 P.M. 63. S.S. 59.) Apr. 10. Thursday. Weather cloudy and a little rainy. Have written to Howard. This is our dear Ida's birthday - seventeen years old. As she is away I have not her weight and height but she is the largest female in the family, and the best looking so far. She has a head of thick dark hair, quite long, reminding me of mine, as it once was, this mine was lighter in color. She is a dear good girl, so conscientious and anxious to please - stands high in her class in the Normal - and is very smart and capable for work - as bright and promising as any girl could well be. (T.S.R. 50. 2 P.M. 58. S.S. 50.) Apr. 11. Friday. I have written to Luther. Mrs. Wagner called to see Mr. Nichols. He continues to fail. This cool weather is favorable for him. (T.S.R. 48. 2 P.M. 67. S.S. 64.)