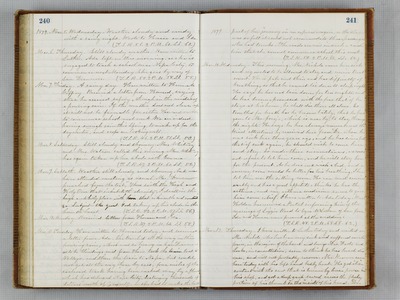 1879. Mar. 5. Wednesday. Weather cloudy and windy with a rainy night. Wrote to Horace and Ida. (T.S.R. 56. 2 P.M. 60. S.S. 60.) Mar. 6. Thursday. Still cloudy weather. Have written to Luther. Ada left us this morning, as she is engaged to teach a school near Napa City, to commence next Monday. She goes by way of San Francisco. (T.S.R. 50. 2 P.M. 58. S.S. 55.) Mar. 7. Friday. A rainy day. Have written to Hannah Geffroy. Received a letter from Howard, saying that he arrived safely, though in the midst of a pouring rain. If the weather does not clear up it will not be favorable for either Howard or Ada to commence school next week. We are indeed having enough rain this Spring, to make up for the dry winter, and crops are looking well. (T.S.R. 46. 2 P.M. 51. S.S. 50.) Mar. 8. Saturday. Still cloudy and showery. Mrs. Whitney and Mrs. Watson called this evening. Mrs. Whitney has again taken up her abode with Emma. (T.S.R. 47. 2 P.M. 60. S.S. 55.) Mar. 9. Sabbath. Weather still cloudy and showery, but we have attended meeting as usual. Mr. Dinsmore preached from the text, "Thus saith the High and Holy One that inhabiteth eternity, I dwell in the high and holy place with him that is humble and contuse" etc. Subject the great God taking up his abode in the humble heart. (T.S.R. 52. 2 P.M. 57. S.S. 56.) Mar. 10. Monday. Received letters from Horace and Ida. (T.S.R. 47. 2 P.M. 64. S.S. 58.) Mar. 11. Tuesday. Have written to Howard today, and received a letters from Ada. She traveled all the way in the pouring rain, which was so heavy in San Francisco as to be blinding, and from there took the boat to Nallejo, and then the train to Napa, but could not get all the way there by cars, four miles of the railroad track having been washed away by a floor which has deluged Napa City, destroying thousands of dollars' worth of property. So she had to make the last 1879. part of her journey in an express wagon, as the stage was so full it could not accommodate those passenger who had trunks. The roads are now in such a condition that she cannot commence school this week. (T.S.R. 50. 2 P.M. 68. S.S. 62.) Mar. 12. Wednesday. This morning, Mr. Nichols came here sick and requested to be allowed to stay and receive treatment. He is pale and thin and has difficulty of breathing, so that he cannot lie down to sleep night. He says he has not lain down for ten nights, and he has become possessed with the fear that if he stays at his home, he shall die there all alone. So troubled for breath has he become lately, that he has gone to Mr. Jory's, which is near by, to stay through the nights. He says he has always remembered the kind attentions he received here from Dr. when he was sick here three years ago, and he has since felt that if sick again, he should wish to come here and stay. So under these circumstances, we could not refuse to let him come, and he will stay here for the present. As he does not wish a bed, and a sunny room would be better for his breathing, I have let him use the silling room. He can read considerably and has a good appetite: thinks he has the asthma, and my asthma medicine seems to give him some relief. I have written to Ada today. Uncle Holden has received a Postal informing him of the marriage of Lizzie Read to Ezra McLellan of San Jose. Ida and Horace were present at the wedding. (T.S.R. 48. 2 P.M. 68. S.S. 62.) Mar. 13. Thursday. I have written to Luther today and waited on Mr. Nichols, who has been very sick and suffered much pain, in the region of the heart and lungs. Drs. Foote and Locke, in consultation, seem to think he has heart disease, and will not probably recover. Mr. Renner came here today with his left hand badly hurt. He got it in contact with the saw that is turned by horse power in his shop, and gob a deep gash sawed across the fleshy portion of his thumb in the inside of his hand. Dr.