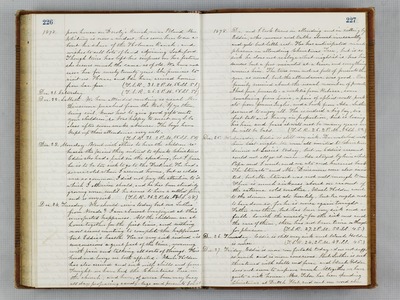 1878. poor house on Doroty's Ranch, near Poland. Mrs. Whitney is now a widow, has come here to see about her share of the Holman Ranch, and wishes to sell lots of land adjoining Lockeford. Though time has left his impress on her features she seems much the same as of old. We have not seen her for nearly twenty years. She promises to visit us. Horace and Ida have arrived home from San Jose. (T.S.R. 31. 2 P.M. 56. S.S. 51.) Dec. 21. Saturday. (T.S.R. 26. 2 P.M. 56. S.S. 51.) Dec. 22. Sabbath. We have attended meeting as usual Mr. Dinsmore preached from the text, "If ye then, being evil, know how to give good gifts unto your children," etc. Was happy to meet my S. S. class after seven weeks absence. The boys have kept up their attendance very well. (T.S.R. 31. 2 P.M. 56. S.S. 50.) Dec. 23. Monday. Went with others to hear the children rehearse the pieces they intend to speak Christmas Eddie also had a part in the speaking, but I fear he is to be too sick to go to the Festival. He had a severe cold when I arrived home, but as colds were so common, I did not pay the attention to it which I otherwise should, and he has been steadily growing worse, until he seems to have a settled fever and is very sick. (T.S.R. 26. 2 P.M. 54. S.S. 48.) Dec. 24. Tuesday. Who should arrive today but our Luther from Nevada? I am almost overjoyed at this unexpected happiness. All the children are at home together for the first time, and nothing now seems wanting to complete the happiness but Eddie's health. He is very sick indeed - is unconscious a great part of the time, meaning with pain and talking all sorts of things. His head and lungs are both affected. Uncle Holden has also arrived and sick with chills and fever. Tonight we have had the Christmas Tree in the church, and have, of course been very busy all day preparing candy - bags and presents for it 1878. Dr. and I took turns in attending and in sitting by Eddie, who moans and talks almost incessantly and gets but little rest. He has anticipated much pleasure in attending Christmas Tree, but is so sick he does not realize what night it is - has his senses but a few minutes at a time, and everything worries him. The trees were not as full of presents this year as usual, but the attendance was good. Our family received about the usual number of presents. I had four presents - a necktie from Rebecca, some [?] from Susie, a pair of splint wall - pockets from Jennie Inglis, and a book from Ada. Luther seemed to enjoy all. He is indeed a big boy, six feet tall and heavy in proportion, but is losing his hair and fears it will not be many years ere he will be bald. (T.S.R. 26. 2 P.M. 56. S.S. 52.) Dec. 25. Wednesday. Eddie is still very sick. Dr. watched with him last night. We were all invited to Christmas dinner at Susie's today, but on Eddie's account could not all go at once. Ada stayed by him while Papa and I went, and we ate and hurried back. The Stewarts and Mr. Dinsmore were also invited, but Mr. Stewart was not well enough to come. There is much sickness about on account of the extreme cold weather. Uncle Holden went to the dinner and ate heartily, but he ought not to have done so, for he is worse again tonight. Father was there, but has been very sick and is feeble. So with the anxiety for the sick ones and the care of them, there has not been time or thought for pleasure. (T.S.R. 27. 2 P.M. 50. S.S. 45.) Dec. 26. Thursday. Eddie is still very sick and Uncle Holden is worse. (T.S.R. 24. 2 P.M. 49. S.S. 45.) Dec. 27. Friday. Eddie is more comfortable today - does not suffer so much and is more conscious. But Luther is sick threatened with chills and fever and Uncle Holden does not seem to improve much. Altogether we have quite a sick house. Mrs. Tabor has been spending Christmas at Dutch Flat, and sent me word she