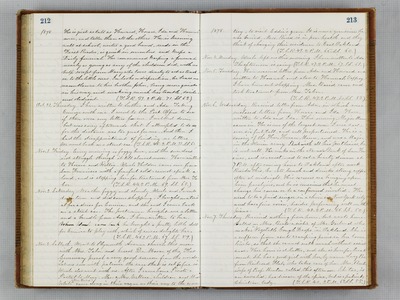 1878. He is just as tall as Howard, Horace, Ida and Hannah were, and taller than all the others. He is learning well at school, writes a good hand, reads in the First Reader, is quick in members and keeps a Daily Journal. He commenced keeping a Journal nearly as young as any of the children did, with us help except from Mary, who loves dearly to act as teacher to the little ones. In looks or disposition, he bears no resemblance to his brother John, being more quiet in his way, and making much less trouble, docile and obedient. (T.S.R. 39. 2 P.M. 71. S.S. 63.) Oct. 31. Thursday. I have written to Luther and Ada. Taking Eunice with me I went to the Post Office to see if there were any letters for me. I walked down but was sorry afterwards that I attempted to do so, for the distance was too great for me. And then I had the disappointment of finding no letters. We went back on a street car. (T.S.R. 45. 2 P.M. 73. S.S. 63.) Nov. 1. Friday. Every morning is foggy here, and the sun does not struggle though it till almost noon. Have written to Horace and Willie. Uncle Holden came over from San Francisco with a fearful cold - cannot speak aloud, and is stopping here for treatment from Mrs. Tabor. (T.S.R. 44. 2 P.M. 69. S.S. 63.) Nov. 2. Saturday. Weather foggy and cloudy. Uncle and I went downtown and did some shopping. I bought material for a dress for Eunice, and she and I came back on a street car. The post man brought me a letter and a bundle from Ada. I have written to her. When Uncle came back he brought a pretty little doll for Eunice to play with, which of course delights her. (T.S.R. 46. 2 P.M. 67. S.S. 59.) Nov. 3. Sabbath. Went to Plymouth Avenue church this morn with Mrs. Tabor and heard Dr. Mooar of the Theo. Seminary preach a very good sermon from the words. "Let us run with patience the race that is set before us." Uncle also went with us. After I came home I wrote a Postal to Mary. Mr. & Mrs. Wallace, children and Miss White Mrs. Baird came along in this wagon on their way to the cemetery, 1878. to visit Eddie's grave It is now a year since he was buried. Mrs. Baird is in poor health and they think of changing their residence to East Oakland. (T.S.R. 49. 2 P.M. 65. S.S. 60.) Nov. 4. Monday. Uncle left us this morning. I have written to Ada. The afternoon is rainy. (T.S.R. 47. 2 P.M. 67. S.S. 61.) Nov. 5. Tuesday. Have received letters from Ada and Howard and written to Hannah and also to Hannah Geffroy. I have been out shopping Mrs. Baird came and took treatment from Mrs. Tabor. (T.S.R. 47. 2 P.M. 60. S.S. 53.) Nov. 6. Wednesday. Received letter from Ada, in which were enclosed letters from Horace and Ida. Have written to Ada and Ida. This evening, Major Mann came in. He is one of the largest men I ever saw over six feet tall, and well proportioned. He is a cousin of the Hon. Horace Mann, and was a Major in the Union army. But with all his portliness, he is not well. He works in the Nevada Bank of San Francisco, and is accustomed to eat a hearty dinner at 7 P. M. after coming home to Oakland after work. Besides this, he eats lunch and drinks strong coffee often at midnight. His excesses are bringing upon him paralyses, and he is conscious that he must change his course or be a confirmed invalid. He used to be a paid singer in a choir in New York city and has a fine voice, besides performing well on the piano. (T.S.R. 42. 2 P.M. 66. S.S. 50.) Nov. 7. Thursday. Received nothing from home, but wrote home. Called on Mrs. Beals - a sister of Mr. Garland who makes "Vegetable Cough Drops" in Oakland. She is a sufferer from acute cramping pains in her lower limbs, so that she cannot walk much without assistance. Her home is at Sutter, and she is here for treatment. She has a good girl with her, by name Lucy Pac from Railroad Flat, who takes care of her. Mrs. Benton wife of Prob. Benton called this afternoon. She too, is an invalid, has disease of the spine, but is a patient, Christian lady. (T.S.R. 40. 2 P.M. 63. S.S. 55.)