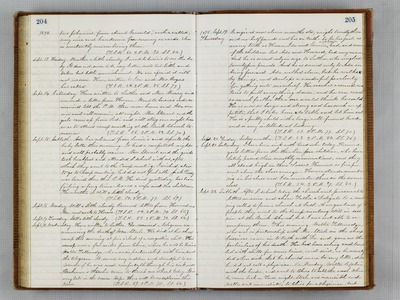 1878. two Jonnies, from Aunt Geronld, each a wallet, very nice and handsome for money or cards. She is constantly remembering them. (T.S.R. 60. 2 P.M. 90. S.S. 84.) Sept. 13. Friday. Weather a little cloudy. I went to Susie's to see the baby. It does not seem to be any better, rests but little and takes but little nourishment. We are afraid it will not recover. Have written to Ida and Mrs. Rogers has called. (T.S.R. 54. 2 P.M. 85. S.S. 77.) Sept. 14. Saturday. Have written to Luther and Mrs. Mowry and received a letter from Horace. Went to Susie's and remained till the P.M. then came home and Ada went over and will remain all night. Mrs. Stewart and the girls came up from Lodi and will stay over night here so as to attend camp meeting at the Brick Church tomorrow. (T.S.R. 56. 2 P.M. 82. S.S. 74.) Sept. 15. Sabbath. Ada has returned from Susie's and reports the baby better this morning. It had a comfortable night and will probably recover. Mrs. Stewart and the girls took breakfast and attended S. school with us, after which they went to the Camp meeting. I wished also to go to Camp meeting, but did not feel able. Jack Purdy was buried there this P.M. He died yesterday, has been failing a long time - leaves a wife and two children. The weather is still a little cloudy. (T.S.R. 50. 2 P.M. 77. S.S. 69.) Sept. 16. Monday. Still a little cloudy. Received letters from Howard and Ida, and wrote to Horace. (T.S.R. 54. 2 P.M. 72. S.S. 65.) Sept. 17. Tuesday. Still a little cloudy. (T.S.R. 51. 2 P.M. 72. S.S. 64.) Sept. 18. Wednesday. Have written to Luther. Dr. received a telegram announcing the death Wm. Steele. He died at his sheep camp this morning at five o'clock of a congestive chill. His camp was a few miles from Chico, where he will be buried. Walter Tallmadge, who was in partnership with him, sent the telegram. It seems very sudden and dreadful to us. Wonder if he was made comfortable through his sickness. Brakeman's thresher came to thresh our wheat today. It is very late in the season. Hope there will be no explosion this time. (T.S.R. 49. 2 P.M. 73. S.S. 64.) 1878. Sept. 19. Thursday. Georgie is now eleven months old, weighs twenty three and one-half pounds and has six teeth. So he has just as many teeth as Horace, Ida and Eunice and Eddie had, and none of the children but Ada and Howard, had any more. And he is second only in size to Luther, who weighed twenty four pounds. And he is second only to Ada in bring forward. Ada walked alone, but he walks by things, and develops a wonderful proclivity for getting into mischief. He reaches around and trees to pull every thing down, and he can reach so much farther than one would think he could. He is now so large and strong and has such an appetite, that I take him to table and let him eat. He is a pretty child with a large well formed head, and is very intellectual looking. (T.S.R. 51. 2 P.M. 77. S.S. 70.) Sept. 20. Friday. Sultry weather. (T.S.R. 52. 2 P.M. 84. S.S. 76.) Sept. 21. Saturday. I have been sick with headache today. Received good letters from the three San Jose children, who have lately passed their monthly examinations, and they all stand high in their classes. Howard is five percent above the class average - Horace stands number six in his class and Ida number three in the same class. (T.S.R. 54. 2 P.M. 87. S.S. 80.) Sept. 22. Sabbath. After S. school today church met pursuant to letters missive and chose Father a Delegate to a meeting called to form a church at Galt. A wagon load of people then went to the Camp meeting still in session at the Brick Church, but I was not able to accompany them. This evening, Walter Tallmadge, who was in partnership with Mr. Steele in the sheep business came in to talk with Dr. and gave us the particulars of his death. He had been ailing and troubled with chills for some time, and said, as he usually did when sick, that he should never be any better, still he did not call a physician. On Monday, Walter left him with the herder, and went to Chico to sell the wool when he came back on Tues night, Steele was insensible and Walter sent immediately to Chico for a physician, but