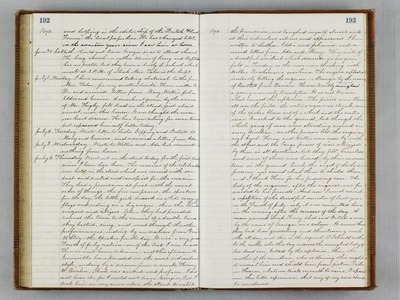 1878. and helping in the editor ship of the "Dutch Flat Forum" - the local paper here. He has changed little in the seventeen years since I saw him at home. June 30. Sabbath. Could not leave Georgic so as to attend church. The Cong. church - or rather Union of Cong. and Baptized has no pastor, but they have a lively S. school which meets at 2 P.M. of which Mrs. Tabor is the supt. July 1. Monday. I have commenced taking electrical baths from Mrs. Tabor, for my swollen limbs. Have written to Dr. and received letters from Mary, Willie, John, Eddie and Eunice. A merchant grocer, by the name of Mr. Higby, fell dead in the street, just about sunset, near this house. It was thought the cause was heart disease. He has been ailing for some time but expressed himself "better" today. July 2. Tuesday. Wrote letter to Sister Geffroy and Postals to Mary and Eunice, and received a letter from Ada. July 3. Wednesday. Wrote to Willie and Ada but received nothing from home. July 4. Thursday. Went out on the street today for the first time since I have been here. The exercises of the celebration were held in the street which was covered with saw dust and seated and canopied for the occasion. They had a procession at first with the usual order of things, the fire companies, the speakers for the day, the little girls dressed in white carrying flags and riding in a big wagon, then the trade wagons and citizens. When they had paraded round the town to the music of a double band they halted, sung, and went through the other performances, ending by an ovation from Geo. McStay - the speaker for the day. It was a very good Fourth of July ovation - one of the best I ever heard. Then we went home to dinner, and this afternoon the Invincibles have paraded in the most ridiculous style, ending by a sermon from a mock Henry W. Beecher, which was wicked and profane. I did not hear it, for I could not leave Georgie, but I took him in my arms upon the street to watch 1878. the procession, and laughed myself almost sick at their ridiculous actions and appearances. I have written to Luther, Eddie and Johnnie, and received letters from Ada and Mary. They write of a dreadful accident which occurred in our grain field on Tuesday, as the men were threshing with Wilbur Brakeman's machine. The engine exploded instantly killing the engineer - a stranger by the name of Barttell from Benicia. He was terribly mangled a young man, only twenty two. It is not known what caused the explosion. The pieces were blown all over the field - the water wagon was struck, some of the spokes blown out of a wheel and the water - man knocked to the ground, but though the whole gang of men were standing around in every direction, no other person but the engineer was hurt. Horace and Willie were near by with the others, and the large pieces of iron whizzed by them in all directions, but they fell, harmless, and some of them were buried, by their momentum in the ground. Surely the "angel of the Lord's presence" was round about them to shield them, and I thank Him for his preserving care. The body of the engineer, after the inquest, was forwarded to his friends. And now I must record a repetition of the dreadful murder of last year on the Fourth of July - only it was committed here in the evening, after the excesses of the day. A man named Drick Tracy shot and killed a man by the name of Granger in a saloon. It seems that they had been quarreling and threatening each other all day, and this is the sequel. O I should rather be the mother who this day receives the mangled body of her dead son, killed by the explosion, than the mother of the murderer, who is striving this night to conceal him and shield him from justice. Father in Heaven, whatever trials on earth be mine, O spare me this bitter experience, that any of my sons should be murderers.