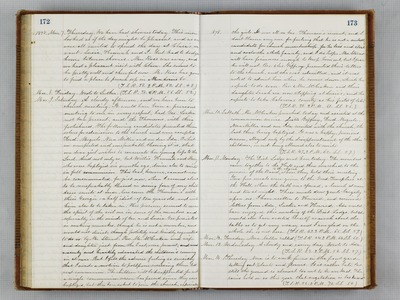 1878. Mar. 7. Thursday. We have had showers today. This morn. looked as if the day might be pleasant and as we were all invited to spend the day at Clara's, we went - Susie, Hannah and I. but had to dodge home between showers. Mr. Ross was away, and we had a pleasant visit with Clara. She seems to be pretty well and cheerful now. Mr. Ross has gone to find a place to preach up in Mendocino Co. (T.S.R. 38. 2 P.M. 50. S.S. 48.) Mar. 8. Friday. Wrote to Luther. (T.S.R. 38. 2 P.M. 56. S.S. 52.) Mar. 9. Saturday. A cloudy afternoon, and we have been to church meeting. It would have been a precious meeting to me in every respect, had Geo. Locke not been present, and the Thomsons, with their foolishness. The following candidates presented them selves for admission to the church and were accepted. Fred. Megerle. Nova Miller and our dear Ida. O what an unexpected and unspeakable blessing it is, that our dear girl wishes to consecrate her young life to the Lord. And not only so, but Willie Hannah and Mary who were baptized six months ago, desire also to unite in full communion. This last, however, cannot nor be consummated, for just now, when I seemed about to be unspeakably blessed in seeing four of my children unite at once, here come the Thomson's with their Georgic - a half idiot of ten years old, and wish him also to be taken in. His presence seemed to raise the spirit of the evil one in some of the numbers and especially in the minds of Geo. and Susie. Geo. persisted in making remakes, though he is not a member, and would not desist, though politely and kindly requested to do so by Mr. Stewart. Rev. Mr. McCraken and wife and daughter just from the East were present and most warmly and heartily advocated the children's coming in at once. But I felt the adverse feeling so sensibly that I made a motion to postpone receiving them till next communion. The children will be disappointed, for not a single communion reason has passed since they were baptized, but they have asked to join the church, especially 1878. the girls. It was all on Geo. Thomson's account, and I don't blame any one for feeling that he is not a suitable candidate for church membership, for he lies and steals and so do the whole family, and I do hope Mr. Stewart will have firmness enough to keep him out, but I fear he will not. Bro. & Sis. Geffroy presented their letters to the church, and she was admitted, and it was voted to admit him when he comes down, which he expects to do soon. Rev. & Mrs. McCraken and their daughter Sarah are now stopping at Susie's, and he expects to take Calaveras county as his field of labor. (T.S.R. 38. 2 P.M. 61. S.S. 56.) Mar. 10. Sabbath. Mr. McCraken preached today and assisted at the communion service. Sister Geffroy, Fred. Megerle, Nova Miller and our Ida united with the church, the last three being baptized. It was a happy, precious season, alloyed only by the disappointment of the other children, in not being allowed also to unite. (T.S.R. 47. 2 P.M. 60. S.S. 57.) Mar. 11. Monday. The Dist Lodge met her today. The members came together to the Hall, and then marched to the music of the Band to the church where they held their meeting. Two free meals were given to the Good Templars at the Hall, where the table was spread, a lunch at noon and tea at night. These meals drew quite largely upon us. I have written to Howard, and received letters from Ada, Luther and Howard. Ada would have enjoyed this meeting of the Dist. Lodge, but she would also have averted herself so much about the tables as to get very weary and I am glad on the whole she is not here. (T.S.R. 43. 2 P.M. 65. S.S. 59.) Mar. 12. Tuesday. Nora Miller called (T.S.R. 44. 2 P.M. 64. S.S. 60.) Mar. 13. Wednesday. A cloudy and rainy day. Wrote to Ada. (T.S.R. 53. 2 P.M. 58. S.S. 57.) Mar. 14. Thursday. Nora is to work for us in the front yard, setting out plants and flowers. It is rather late, but still the ground is almost too wet to be worked. The rains hold on so this year that vegetation is backward. (T.S.R. 56. 2 P.M. 70. S.S. 64.)