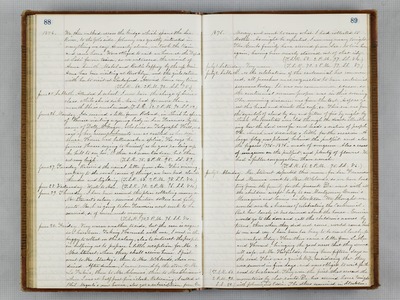 1876. We then walked across the bridge which spans the Sac. River, to the Yolo side. Johnny was greatly interested in everything we say. Al nearly eleven, we took the train and came home. Were obliged to wait an hour at the Depot at Lodi for our train, so we witnessed the arrival of Anna Smith, Mabel and Bertie Geffroy by the up train. Anna has been visiting at Brooklyn, and the girls return with her to visit at Lockeford. Arrived home very tired. (T.S.R. 62. 2 P.M. 92. S.S. 75.) June 25. Sabbath. Attended S. school. I now have the change of Susie's class, while she is sick - have had for more than a month. She is much missed. (T.S.R. 62. 2 P.M. 92. S.S. 82.) June 26. Monday. Ida received a letter from Roland, in which he speaks of Horace visiting a young lady in San Francisco, by the name of Dolly McGregor, who lives on Telegraph Hill, and says "if her accomplishments are as exalted as her residence. Horace had better make a splice." He says he fancies Horace saying to himself as he goes panting up the hill to see her. "O thon and none too dear, but thou art very high." (T.S.R. 75. 2 P.M. 95. S.S. 89.) June 27. Tuesday. Received the usual letter from Ada. This evening, contrary to the usual course of things, we have had clouds thunder and lighting. (T.S.R. 68. 2 P.M. 98. S.S. 84.) June 28. Wednesday. Wrote to Ada. (T.S.R. 70. 2 P.M. 96. S.S. 84.) June 29. Thursday. I have been around the place collecting money on Mr. Stewart's salary - received thirteen dollars and forty cents. Mr. S. is going to San Francisco next week to be married, so of course needs money. (T.S.R. 70. 2 P.M. 96. S.S. 84. June 30. Friday. Very warm weather to ride, but the case is urgent, so I have been. Taking Hannah with me. I went in the buggy to collect on the salary, also to interest the people in helping us to prepare a little reception for Mr. & Mrs. Stewart, when they shall arrive home. I first went to Mrs. Starkey's, then to Mrs. McCloud's, where we dined. After dinner, I came round by the store to Mr. Le Faber's, then to Mr. Clemen's, then to Mrs. Chrisman's where I was at half past five o'clock. Returning, I called at Phil. Megerle's new house, also got a subscription from Geo. 1876. Mowry, and went to carry what I had collected to Mother. As might be expected, I am very weary tonight. The Grubs family have arrived from Sac. to live here again, having been nearly starred out of that city. (T.S.R. 68. 2 P.M. 97. S.S. 84.) July 1. Saturday. Very warm. (T.S.R. 70. 2 P.M. 97. S.S. 87.) July 2. Sabbath. As the celebration of the centennial has commenced, all preachers were requested to have centennial sermons today. It was our communion season, so the centennial sermon proper was in this evening. The morning discourse was from the text, "As oft as ye eat this bread and drink this cup", &c. This eve. was from the symbols of cloud by day and pillar of fire by night by which the Israelites were led through the desert - illustrating how the Lord cares for and leads a nation of people. The church was decorated a little for the occasion. A large flag was placed behind the pulpit and also the figures" 1776-1876" - made of evergreen. Also a cross of evergreen on the pulpit, and plenty of flowers. We had a fuller congregation than usual. (T.S.R. 66. 2 P.M. 95. S.S. 86.) July 3. Monday. Mr. Stewart departed this morn - for San Francisco and Nemma went to Mrs. McCloud’s, so we have lost two from the family for the present. Dr. went with all the children except baby to see Montgomery Queen's Menagerie and Circus in Stockton. We thought we would make a business of celebrating the Centennial. But how lonely it has seemed about the house. Eunice would go to the door and call the children's names by turns, then when they did not come, would come back to me and cry. I have been too busy to be much lonely, for we washed today. Then there came a letter from Luther and Howard, bringing the good news that they arrived all safe, at Mr. Hetfield's, having been fifteen days on the road. This was a quick trip, considering that they were snowed in five days, and were obliged to wait for the road to be cleared. They were the first that crossed the mountains by that route. Dr. has arrived home tonight with Johnnie Mary and Eddie. The others remained in Stockton. (T.S.R. 60. 2 P.M. 93. S.S. 82.)