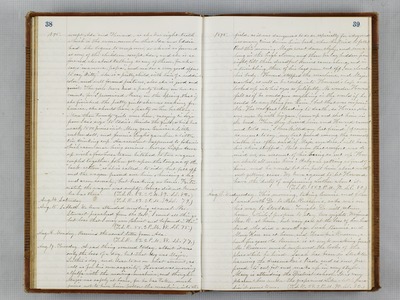 1875. except Ada and Howard, as she has eight teeth which is the same number that Ida and Eddie had. She begins to creep now, so she is as forward as any of the children, except Ada, and she is as forward also about talking as any of them, for she says "mamma, papa," and makes a very good effort to say "kitty." She is a pretty child, with hair of a reddish color, and well formed features, also she is good and quiet. The girls have had a party today on her account, for I promised Mary in the Spring, that if she finished the pretty quilt she was making for Eunice, she should have a party on her birthday. More than twenty girls were here, varying in size from Ida's size to Eddie's. Besides the quilt, which has nearly 1500 pieces in it, Mary gave Eunice a little rubber doll, and Jennie Luglis gave her a little tin drinking cup. An accident happened to Johnnie which came near being serious. George Lippe drove up with a four-horse team hitched to two wagons coupled together. John got upon the tongue of the "back-action," as it is called, to ride, but fell off and the wagon passed over him, bruising a leg and arm severely, but breaking no bones. Fortunately the wagon was empty. George did not know he was there. (T.S.R. 53. 2 P.M. 89. S.S. 82.) Aug. 14. Saturday. (T.S.R. 53. 2 P.M. 94. S.S. 79.) Aug. 15. Sabbath. We have attended meeting as usual. Mr. Stewart preached from the text," I count all things but loss that I may win Christ and be found in him" (T.S.R. 55. 2 P.M. 88. S.S. 75.) Aug. 16. Monday. Received the usual letter from Ada. (T.S.R. 53. 2 P.M. 88. S.S. 77.) Aug. 17. Tuesday. A sad thing occurred today, albeit it was only the loss of a dog, but that dog was Major, Luther's dog, and dear to us on that account, as well as for his own sagacity. Howard was mowing alfalfa with the mowing machine, and thought Major was safely at home, for he has taken much pairs not to have him follow the machine into the 1875. field, as it was dangerous to do so, especially for a dog, and has many times driven him back, when he tried to follow But this morning Major went down, slyly, and ran along in the high clover, and there he lay hidden from sight till those dreadful knives came along and in a twinkling, three of his legs were cut off, one closet his body. Howard stopped the machine, and Major crawled, as well as he could, into Howard's lap and looked up into his eyes so pitifully. No wonder Howard felt as if he would give anything in the world if he could do any thing for him, but that was impossible. He was fast bleeding to death, so Horace, who was near by with his gun, came up and shot him in the head. Then they buried him and Howard came and told me, "I have killed my best friend." (of course he meant to say, "my best friend among the animals" Luther has often said," if Major ever dies, I will have his skin stuffed." But even that comfort was denied us, on account of his being so cut up. How we shall all miss him ! Baby was getting so fond of him, and he would let her pull him about without getting cross. We have agreed to let Howard have the duty of informing Luther about it. (T.S.R. 55. 2 P.M. 93. S.S. 80.) Aug. 18. Wednesday. This morning, taking Emmie and John I went with Dr. to Mrs. Russem's, as he was on his way to Stockton. Tonight, Dr. will return home, while I propose to stay two nights. We found Mrs. R. at home, but very sad at the loss of her husband, who died a month ago. Sarah, Bennie and Mary Kerr are at home, and Frankie Russem, about five years old. Bennie is at work making fence Mr. Russem much improved the looks of the place while he lived. Sarah has been in Stockton learning the dressmaker's trade and is now prepared to "cut, fit and make up" in any style. Mary is attending the District school. It is very pleasant here under the grapevines. Like a little paradise it seems to me. (T.S.R. 58. 2 P.M. 90. S.S. 80.)