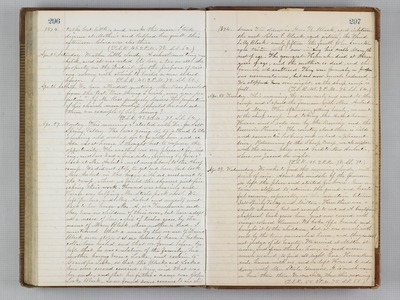 1874. talks but little, and works the more. I took dinner at Mother's and helped her quilt this afternoon. Clara was also there. (T.S.R. 45.2 P.M. 78. S.S. 62.) Apr. 25. Saturday. Weather little cloudy. A school meeting was held, and it was voted to levy a tax on all the property in the District, for the purpose of raising money with which to build a new school house. (T.S.R. 45.2 P.M. 72. S.S. 60.) Apr. 26. Sabbath. We have attended meeting. Mr. Ross preached from the text, "One thing I wish, even your perfection." If Mr. Ross sincerely desires the perfection of his church membership, should he not set them an example of holy living.? (T.S.R. 43.2 P.M. 71. S.S. 64.) Apr. 27. Monday. This morning I started with Dr. for Salt Spring Valley. He was going up to attend to the shearing and wished me to go with him, and as Ada was at home, I thought best to improve the opportunity. The weather was very pleasant for riding, and we had a fine ride, arriving by five o'clock at Mr. Anbert's, next neighbor to the sheep camp. We did not stop to get out here, but took Mrs. Anbert in the buggy with us, and went to the camp, where we found the shearers just finishing their work. Howard was shearing and Horace was helping Mr. Steele pack wool. We left Dr. here, and Mrs. Anbert and myself went back to her house. Mr. A. is a Frenchman and they have no children of their own, but have adopted a niece of hers, a girl of twelve years, by the name of Mary Black, whose mother is dead. I mentioned that a man by the name of David Black, once stopped at our house to have a broken collar-bone healed, and that we found before he left that he was a relative of the family, his mother having been a Locke, and cousin to Grandpa Locke, so that the Blacks and Lockes here were second cousins. Mary said that was her uncle, and that her father's name was John Locke Black. So we found some cousins to our children. 1874. The oldest is Geo. H. Black, aged eighteen the next Clara E. Black, aged sixteen the third Sally Black nearly fifteen - the fourth John James Black, aged thirteen, who is now visiting his sister Mary, the next of age. The youngest Hannah died at three years of age, and the mother is dead, and the family all scattered. They were formerly in prosperous circumstances, but are now much reduced. We stopped here over night, as the sheep camp is full. (T.S.R. 45.2 P.M. 76. S.S. 64.) Apr. 28. Tuesday. This morning, Dr. arose early and went to the camp and I spent the forenoon with Mrs. Anbert and Mary. This afternoon, getting lonely, we went to the sheep camp, and taking Mrs. Anbert home Horace and I rode over by the Reservoir and the "Reservoir House." The country about there is wild and romantic looking and we had a pleasant drive. Returning to the Sheep Camp, we ate supper with the men, then went back to Mrs. Anbert's, where we passed the night. (T.S.R. 45.2 P.M. 78. S.S. 71.) Apr. 29. Wednesday. We woke to find the morning cloudy, with signs of rain. About the middle of the forenoon, we left the place and started for home. Once or twice we stopped to admire the grand and beautiful scenery, especially on the mountain between Salt Spring Valley and Milton. Here there was a small shower, but not enough to wet no. A beautiful chapparal bush grows here, just now covered with orange colored blossoms. We broke off a branch and brought it to the children, but it was much withered by the time we reached home, and they could not judge of its beauty. We arrived at Milton at noon, and from thence home in good season, much wearied, to find all right here. Horace M[?] rode home with us, and we left Howard to ride down with Mr. Steele tomorrow. It is much warmer here than there. We were chilly there this morning. (T.S.R. 55.2 P.M. 75. S.S. 66.)