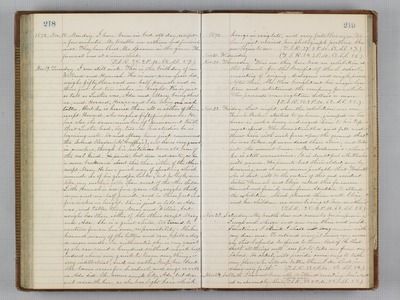 1872. Nov. 18. Monday. I have been in bed all day, except a few minutes. My troubles are asthma and feverishness. They have laid Mr. Spooner in the grave. The funeral was at eleven o'clock. (T.S.R. 35. 2 P.M. 63. S.S. 59.) Nov. 19. Tuesday. I am still sick. This is the birthday of our Willard and Hannah. He is now seven years old, weighs fifty three and one half pounds and is three feet and ten inches in height. He is just as tall as Luther was, Ada and Mary being shorter, and Howard, Horace and Ida being one inch taller. But he is heavier than all or either of them except Howard, who weighed fifty five pounds. He has also the same number of permanent teeth that Luther had, viz. two. In his studies he is learning well. He and Mary have just commenced the Second Reader (McGuffey's), and he is very quick in numbers, though his recitations have all been of the oral kind. He prints, but does not write, so he is more backward about this than either of the others except Mary. He has a quick way of speaking which reminds us of his grandpa Locke, but he looks more like my mother's folks than most of the other children. Little Hannah is now five years old, weighs thirty seven and one half pounds, and is three feet and five inches in height. She is just as tall as Ada was, and taller than Mary and Willie, but weighs less than either of the others except Mary and Ada. She is a quiet child, too timid to venture far on her own responsibility. She has learned many of the letters and can spell a dog or more words. In arithmetic she is very quick as she can count a hundred without much help. Indeed she is very quick to learn anything, is very intellectual, and we rather keep her back. She learns verses for S. school, and sings as well as Ada did. She seems much like Ada, but does not resemble her, as she has light hair which 1872. hangs in sing lets, and very full blue eyes. We have just received her photograph pictures. She now begins to sew. (T.S.R. 37. 2 P.M. 63. S.S. 57.) Nov. 20. Wednesday. (T.S.R. 34. 2 P.M. 63. S.S. 56.) Nov. 21. Thursday. This eve they have had an exhibition at the church for the benefit of the S. school, consisting of singing, dialogues and single pieces. After these, Mr. Ross brought out his magic lantern and entertained the company for a while. The proceeds were eighteen dollars or more. (T.S.R. 38. 2 P.M. 63. S.S. 58.) Nov. 22. Friday. Last night, when the exhibition was over Frank Parker started to go home, jumped on his horse in such a hurry and urged him to his topmast speed. The horse stumbled and fell and threw him with such force upon the ground that he was taken up more dead than alive, and take into the nearest house - Mr. Anderson's - where he is still unconscious. It is doubtful whether he will recover. His parents lost their eldest son by drowning, and it now seems probable that Frank, who is next, will be the victim of this sad accident. Sister Hannah and Eliza called this forenoon. Hannah and family came from Stockton to attend the exhibition, which pleased them well. Eliza and her children are now living at her mother's. (T.S.R. 35. 2 P.M. 63. S.S. 58.) Nov. 23. Saturday. My health does not seem to be improving. I cough and wheeze and am very thin and weak. Sometimes I think I shall not long remain with my dear ones. To outward view, it seems very necessary that I should be spared to them. But if "He that doeth all things well" sees fit to take me from my labors, He surely "will provide" some ones to take my place, who will do better than I do. "Lord, increase my faith." (T.S.R. 38. 2 P.M. 58. S.S. 54.) Nov. 24. Sabbath. I have not been able to attend meeting. Susie called as she went by. She is a good sister. (T.S.R. 33. 2 P.M. 55. S.S. 50.)