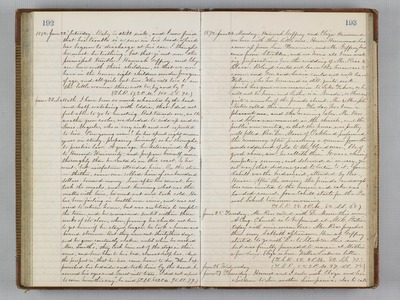 1872. June 22. Saturday. Baby is still sick, and I now find that his trouble is a sore in his head, which has begun to discharge at his ear. I thought he must be teething, but that is not now the principal trouble. Hannah Geffroy, and Eliza are here with their children, so that we now have in the house eight children under five years of age, and all girls but two. Who will live to see the little women there will be, by and by? (T.S.R. 67. 2 P.M. 100. S.S. 90.) June 23. Sabbath. I have been so much exhausted by the heat and half watching with Eddie, that I did not feel able to go to meeting. But towards eve, as the weather grew cooler, we decided to ride up and see Louis Megerle, who is very sick and not expected to live. Poor young man! he has spent eight or more years in study, preparing himself, as he thought, to practise law. A year ago, he determined to go to Harvard University, and prepare himself more thoroughly than he could do on this coast. So he went, but misfortune attended him. On the steamer thither, some one robbed him of one hundred dollars - borrowed money. Soon after his arrival, he took the measles, and not knowing what was the matter with him, he went out and took cold. He has been failing in health ever since, and was advised to return home, but was ambitious to complete the term, and he remained until within three weeks of its close, when, fearing he should not live to get home, if he stayed longer, he took a homeward bound steamer. But they were out thirty three days, and he grew constantly weaker, until when he reached Mrs. Smith's, they took him out of the stage in their arms, and bore him to his bed, almost helpless. And the prospect is, that he has come home to die. When I approached his bedside and took him by the hand, he covered his eyes and burst into tears. "I did not expect to come home this way," he said. (T.S.R. 60. 2 P.M. 95. S.S. 79.) 1872. June 24. Monday. Hannah Geffroy and Eliza Hammond are here with their little ones. Horace Hammond has come up from San Francisco, and Mr. Geffroy has come from Stockton, and we have all been making preparations for the wedding of Mr. Ross & Clara. Roland could not leave the horse cars to come, and Geo. and Susie could not well leave Wallace, who has been and is still, quite sick. Josiah has gone on an excursion to Lake Tahoe, so he will not be here, and Luther is in Nevada, so there are quite a number of the friends absent. Mr. & Mrs. John Norton called this morning. The day has been a pleasant one, and the evening also. Mr. Ross and Clara were married in the church, and the public were invited, so that the house was pretty well filled. Rev. Dr. Mooar of Oakland performed the ceremony after preaching a sermon from the words addressed of old to the blind man, "Be of good cheer, rise, he calleth thee" It was a cheering comforting sermon, and delivered in an easy, genial way, that did one good to listen to it. Josie Cahill was the bridesmaid, attended by Bro. Horace. After the service, the friends and neighbors were invited to the house, and cake was handed round. Josie Cahill starts for the Normal School tomorrow morning. (T.S.R. 58. 2 P.M. 80. S.S. 68.) June 25. Tuesday. Mr. Ross called with Dr. Mooar this morn. A Cong, Church is to be formed at Mok. Station today with nine members. Mr. Ross preaches there every Sabbath afternoon. Hannah Geffroy started to go with Dr. to Stockton this morn. but was finally persuaded to remain at Mother's a few days. Eliza is here. Wallace Locke is better. (T.S.R. 50. 2 P.M. 80. S.S. 71.) June 26. Wednesday. (T.S.R. 55. 2 P.M. 87. S.S. 75.) June 27. Thursday. Howard and I rode with Eliza and her children to her mother Simpson's, also to call