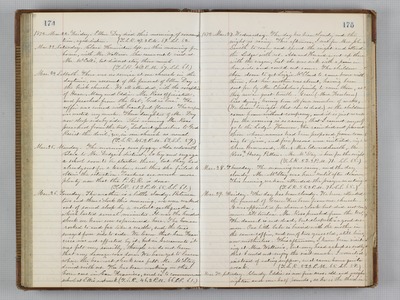 ~1872. Mar. 22. Friday. Ellen Day died this morning, of consumption, aged sixteen. (T.S.R. 47. 2 P.M. 69. S.S. 62.) ~Mar. 23. Saturday. Clara Humiston left us this morning for home, with Mr. Wallace. She came out visit at Mr. McCall's, but did not stay there much. (T.S.R. 46. 2 P.M. 67. S.S. 61.) ~Mar. 24. Sabbath. There was no service at our church in the daytime, on account of the funeral of Ellen Day at the brick church. We all attended, with the exception of Horace, Mary and Eddie. Mr. Ross officiated, and preached from the text, "God is love." The coffin was covered with beautiful flowers. The corpse was wasted very much. Three daughters of Mr. Day now sleep side by side. This evening Mr. Ross preached from the text, "Submit yourselves to God Resist the devil," etc. in our church as usual. (T.S.R. 45. 2 P.M. 63. S.S. 59.) ~Mar. 25. Monday. The morning was foggy. Ada rode with Clara to Mr. Dodge's district, to try and engage a school soon to be started there, but they had already sent for a teacher, and thus she failed to obtain the situation. Teachers are much more plenty now that the P. R. R. is done. (T.S.R. 51. 2 P.M. 65. S.S. 61.) ~Mar. 26. Tuesday. The weather is a little cloudy. Between two and three o'clock this morning, we were waked out of sound sleep by a violent earthquake, which lasted several minutes. It was the hardest shock we have ever experienced here. The house rocked to and fro like a cradle, and the trees swayed from side to side. We learn that San Francisco was not affected by it, but in Sacramento it was felt very sensibly, though we do not learn that any damage was done. We have yet to learn where the heaviest shock was felt. Mr. McStay dined with us. He has been working on the horse cars in San Francisco, and is to commence school at Ellis next week. (T.S.R. 46. 2 P.M. 66. S.S. 61.) ~1872. Mar. 27. Wednesday. The day has been cloudy and the night is rainy. This afternoon, I sent for Mrs. John Smith to come and spend the night and attend the Lodge with us. Ada and Howard went up there with the wagon, but she was sick with a pain in her side and could not come. The children then drove to get Lizzie McCloud to come home with them, but her mother was absent, having been sent for by Mr. Chisholms family to come there, as they are in great trouble. Grace (Mrs. Freeborn) lies dying, having been ill for a number of weeks, (We learn tonight that she is dead.) so the children came home without company, and it is just as well for the evening is so rainy, that I cannot myself go to the Lodge. However, the rain did not prevent those whose names had been proposed from coming to join, and five persons were initiated, viz : Clara Hammond, Mr. & Mrs. Edward Smith, Mr. Ross, & Harry Patton. Mr. McStay is here for the night. (T.S.R. 53. 2 P.M. 71. S.S. 65.) ~Mar. 28. Thursday. The morning was rainy, and the day cloudy. Mr. McStay was here until after dinner. This evening we have attended the prayer meeting. (T.S.R. 55. 2 P.M. 71. S.S. 65.) ~Mar. 29. Friday. The day has been cloudy. We have attended the funeral of Grace Free born from our church. It was appointed for eleven o'clock but did not commence till twelve. Mr. Ross preached from the text, "The damsel is not dead, but sleepeth" - a good sermon. One little babe is buried with the mother in the same coffin, and one of two years old, still lives, now motherless. This afternoon, I have been visiting at Mrs. Wallace's, but my head ached so sadly that I could not enjoy the visit much. I vomited instead of eating supper, and came home quite weak. (T.S.R. 53. 2 P.M. 65. S.S. 58.) ~Mar. 30. Saturday. Cloudy. Eddie is now five mos. old and weighs eighteen and one-half pounds, so he is the third in