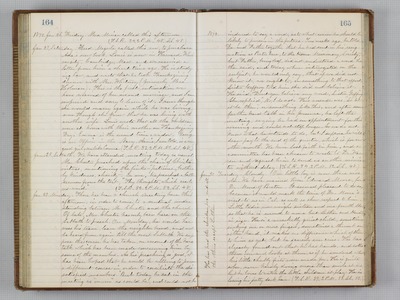 1872. Jan. 26. Friday. Mrs. Miner called this afternoon. (T.S.R. 34. 2 P.M. 48. S.S. 48.) Jan. 27. Saturday. Fred Megerle called this eve, to purchase Ada's new book. Louis is now in Harvard University, Cambridge, Mass. and we received a letter from him a short time ago. He is studying law, and wrote that he took Thanksgiving dinner with Mrs. Whitney (formerly Mrs. Holman). This is the first intimation we have received of her second marriage, and I am surprised and sorry to learn of it. I never thought she would marry again while he was living, even though she knew that he was living with another wife. Louis wrote that all the children were at home with their mother on Thanksgiving Day. Emma is the second time a widow. George is an Officer in the Navy. Annie, I am told, is a very good girl, unlike Emma. (T.S.R. 33. 2 P.M. 50. S.S. 48.) Jan. 28. Sabbath. We have attended meeting today as usual. Mr. Chester preached upon the chain of Christian virtues, mentioning the links "patience, brotherly kindness, charity". In eve, he preached a better sermon from the text, "Thy thoughts, which are to us ward." (T.S.R. 32. 2 P.M. 52. S.S. 48.) Jan. 29. Monday. There has been a church meeting here this afternoon, in order to come to a mutual understanding between Mr. Chester and the church. Of late, Mr. Chester has only been here on the Sabbath to preach. On Monday, he would harness his team, leave the neighborhood, and not be heard from again till the next Sabbath. We suppose this course he has taken, on account of the hard talk which has been made concerning him by some of the members. As his preaching is good, it has been hoped that he would be willing to pursue a different course in order to conciliate the dissatisfied members. But today he sat in the meeting as "mum" as could be, and could not be 1872. induced to say a word, as to what course he should be likely to pursue in the future. Two weeks ago, he told Dr. and Father together that he had sent in his resignation as Pastor here, to the Home Missionary Society, but Father, being deaf, did not understand a word he then said, and today when interrogated on the subject, he would only say, that "if we did not know it, we ought to," or something to that effect. Sister Geffroy told him she did not believe it. He said, "Don't you believe my word, Sister Geffroy" She replied," No, I do not," His answer was, "So let it be then," or something like this, and after some further hard talk in his presence, he left the meeting, saying he had an appointment for this evening and could not stop longer. So we do not know what he intends to do, but I suppose he will draw pay to the end of the quarter, which is for another month. We have lost faith in him, and a committee has been chosen to write to Dr. Warren and request him to send us another minister without delay. (T.S.R. 34. 2 P.M. 52. S.S. 48.) Jan. 30. Tuesday. Cloudy. Our little boy is now three mos. old. We have named him Edward Moore, for Dr. Moore of Boston. It seemed pleasant to do so, because it would mark the time of Dr. Moore's visit to us in Cal. as well as show respect to him. Little Eddie now weighs sixteen and one fourth lbs so that he is second to none but Luther and Howard in size. He is a remarkably quiet child, sometimes sucking one or more fingers, sometimes a thumb on either hand, it makes no difference which of them to him as yet, but he scarcely ever cries. He has already found out that he has hands, and rolls them over and looks at them, as if he wondered what his little chubby fists were made for. He is quite sober, never hardly doing more than smile at us, but he loves to watch the little children at play. He is losing his pretty, dark hair. (T.S.R. 39. 2 P.M. 56. S.S. 50.)