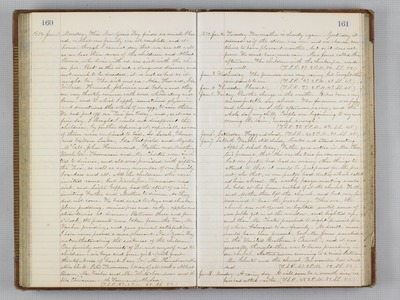 1872. Jan. 1. Monday. This New Year's Day finds us much blessed, in that our family are all complete, and at home, though I cannot say that we are all well, as no less than seven of the children and Albert Brown, who lives with us, are sick with the chicken pox. But as this is not a dangerous disease, and not much to be dreaded, it is not so bad as it might be. The sick ones are; Ada, Howard, Ida, Willard, Hannah, Johnnie and baby - and they are very thickly covered with sores, which sting and burn, and to which I apply sometimes glycerine, and sometimes the white of an egg, to ease them. We had put off our "Tree" for today, and, as it was a fine day, I thought I would not disappoint the children, by farther deferring it, especially as none of them were confined to bed. So Sarah, Elmer and Wallace Locke, Ida Hetfield and Myrtie NcCall, John Hammond, Father and Mother, Uncle Geo. Thomason and Mr. Chester were invited to dinner, and all were provided with gifts on the "Tree", as well as every member of our family, boarders and all. All the children who were invited came, but Uncle Geo. Thomason was sick, and Sister Geffroy had the start of us in inviting Father and Mother to dinner, so they did not come. We had roast turkeys and chicken plum pudding, mince pies and cake, apples and strawberries at dinner. Between three and four o'clock, the presents were taken from the tree, Mr. Vischer presiding, and gave general satisfaction. I have never passed a more pleasant New Year's Day, not withstanding the sickness of the children. Our family now consists of Dr. and myself and ten children - six boys and four girls - (with great thankfulness of heart I say it) Mr. Henshaw the store clerk - Peter Thomason man of all work - Albert Brown, Mr. Vischer and Mr. White - boarders - and the two Chinamen - Ah Toon and Ah Saow. (T.S.R. 47. 2 P.M. 55. S.S. 50.) 1872. Jan. 2. Tuesday. The weather is cloudy again. Yesterday it seemed as if the storm was over and we should continue to have pleasant weather, but so it does not prove. We must have more rain. Mrs. Jones called this afternoon. The children with the chickenpox, are doing well. (T.S.R. 39. 2 P.M. 54. S.S. 50.) Jan. 3. Wednesday. The forenoon was very rainy, but tonight the rain seems to be over. (T.S.R. 47. 2 P.M. 51. S.S. 49.) Jan. 4. Thursday. Pleasant (T.S.R. 37. 2 P.M. 49. S.S. 45.) Jan. 5. Friday. Another change in the weather. It has been a very uncomfortable day abroad. The forenoon was foggy and cloudy, and the afternoon rainy, and the whole day very chilly. People are beginning to cry concerning the rain, "enough, enough." (T.S.R. 38. 2 P.M. 43. S.S. 45.) Jan. 6. Saturday. Foggy and cloudy. (T.S.R. 40. 2 P.M. 50. S.S. 45.) Jan. 7. Sabbath. Weather still cloudy. Could not attend meeting. After S. school today. Father gave notice in Mr. Chester's presence, that this was the time for communion, but our pastor had had so many other things to attend to, that it would be postponed for the present, also that, as our pastor had duties which called him abroad, the weekly prayer meeting would be held at his house, instead of at the church. Father and Mother then left the church, and but very few remained to hear the preaching. This eve, the church was not opened or lighted until some of our folks got in at the window, and lighted up, and then Mr. Chester preached to eight persons, five of whom belonged to our family. No doubt, more would have been present, but Mr. Jones preached in the "United Brethren's Church", and it was generally thought there was to be no preaching in our church. Matters seem coming to a crisis between Mr. Chester and the church. We wonder how it will end. (T.S.R. 47. 2 P.M. 52. S.S. 50.) Jan. 8. Monday. A rainy day. It will soon be a month river we have had settled weather. (T.S.R. 48. 2 P.M. 50. S.S. 50.)