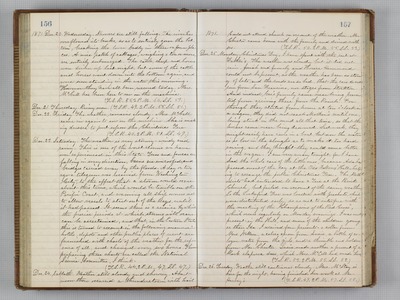 1871. Dec. 20. Wednesday. Showers are still falling. The river has over flowed its banks, so as to entirely cover the bottom, breaking the lever badly in three or four places. A nice patch of cabbages, weighing a ton or more, are entirely submerged. The cattle, sheep and horses were driven up last night, but some of the cattle and horses went down into the bottom again, and were seem standing in the water this morning. However they have all been rescued today. Mrs. McCall has been here to sew on the machine. (T.S.R. 55. 2 P.M. 60. S.S. 59.) Dec. 21. Thursday. Rainy morn. (T.S.R. 49. 2 P.M. 55. S.S. 51.) Dec. 22. Friday. The weather remains cloudy. Mrs. McCall came in again to sew on the machine. She is making dresses to put upon the Christmas Tree. (T.S.R. 40. 2 P.M. 51. S.S. 49.) Dec. 23. Saturday. The weather is very stormy windy and rainy. This is one of the worst storms we have ever experienced in this State. Trees and fences are falling in every direction, barns are unroofed, and bridges carried away by the floods. A day or two ago a telegram was received from Washington City, to the effect that a storm would occur about this time, which would be terrible on the Pacific Coast, and warning all ship owners not to allow vessels to start out of the Bays, until it had passed. It seems there is a science by which the precise periods at which storms will occur can be ascertained, and that in the Eastern States this is turned to account in the following manner's hotels, depots and other public places of resort are furnished with charts of the weather for the reference of all, and changed every six hours. Those preparing these charts are called the National Service Committee, I think. (T.S.R. 44. 2 P.M. 47. S.S. 47.) Dec. 24. Sabbath. Weather still cloudy and showery. About noon there occurred a thunderstorm with hail. 1871. Could not attend church on account of the weather. Mr. Chester came home with the family and dined with us. (T.S.R. 50. 2 P.M. 55. S.S. 53.) Dec. 25. Monday. Christmas Day. I have spent with the rest at Father's. The weather was cloudy but it did not rain. Josiah and family and Horace Hammond could not be present, as the weather has been so stormy of late, and the roads are so bad, that the cars do not run from San Francisco, nor stages from Stockton. And indeed, Geo.'s family came near being prevented from arriving there from the Ranch. For though they started from home at ten o'clock in a wagon, they did not reach Mother's until one, being stuck in the mud all that time, so that the horses came near being drowned. Last week, they might easily have come in a boat, but now the water is so low in the sloughs as to make it too hard rowing, and they thought they could come better in the wagon. I am very weary tonight, for I have had the whole care of the little ones, because Ada has passed most of the day at the Odd Fellows' Hall, helping to arrange the public Christmas Tree. The Methodists had intended to have a Tree at the Brick Church, but failed on account of the rainy weather. So the Lockeford Tree was loaded with presents, which were distributed early, so as not to interfere with the meeting of the "Champions of the Red Cross", which occurs regularly on Monday evenings. I was not present in the Hall, and on one of the children younger than Ida. I received four presents - a collar from Mrs. Wallace, a calico apron from Susie, a bottle of cologne water from the girls, and a thimble and holder from Mr. Chester. Susie made mother a present of a black alapacca dress, which Mrs. McCall had made here (T.S.R. 53. 2 P.M. 55. S.S. 53.) Dec. 26. Tuesday. Weather still continues cloudy. Mrs. McStay is here for the night, having finished her work at Mr. Harvey's. (T.S.R. 49. 2 P.M. 57. S.S. 55.)