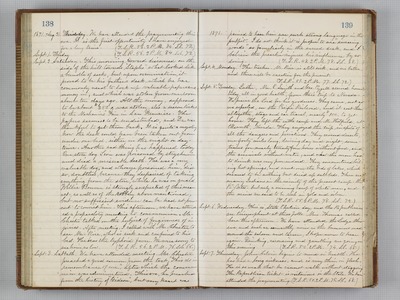 1871. Aug. 31. Thursday. We have attended the prayer meeting this eve. It is the first opportunity I have enjoyed for a long time. (T.S.R. 56. 2 P.M. 84. S.S. 73.) Sept. 1. Friday (T.S.R. 56. 2 P.M. 84. S.S. 73.) Sept. 2. Saturday. This morning, Howard discovered on the side of the hill towards "Staples" what looked like a bundle of sacks, but upon examination, it proved to be his father's desk, which he has commonly need to lock up valuable papers and money in, and which was stolen from our room about ten days ago. All the money, supposed to be about $250, was stolen, also a season ticket to the Mechanics' Fair in San Francisco. The papers seemed to be undisturbed, and Dr. was thankful to get them back. It is quite a mystery how the desk could have been taken out from under our bed, either in the night or daytime. Another sad thing has happened today. Our store dog Lion was poisoned by strychnine and died a miserable death. He was a very valuable dog, and whoever poisoned him, did so, doubtless, because they despaired of taking anything from the store, while he was on guard. Willie Bonner is strongly suspected of this mean act, as well as of the robbery above mentioned, but no sufficient evidence can be had at present to convict him. This afternoon, we have attended a preparatory meeting to communion. Mr. Chester talked on the subject of forgiveness of injuries. After meeting, I called with Mr. Chester to see Mr. Rice, who is sick and confined to his bed. He has the typhoid fever. We were sorry to see him so low. (T.S.R. 56. 2 P.M. 76. S.S. 66.) Sept. 3. Sabbath. We have attended meeting. Mr. Chester preached a good sermon from the text, "This do in remembrance of me," after which the communion was administered. This eve, he preached from the history of "Gideon," but my heart was 1871. pained to hear him use such strong language in the pulpit. I do not think it is proper to use "swearing words" so familiarly in the sacred desk, and I believe the preacher injures his influence by so doing. (T.S.R. 48. 2 P.M. 78. S.S. 68.) Sept. 4. Monday. The teacher - Mr. Rice is still sick, and no better, and there will be vacation for the present. (T.S.R. 51. 2 P.M. 77. S.S. 72.) Sept. 5. Tuesday. Luther, Mr. E. Smith and Geo. Pygall arrived home today, all in good health, from their trip to Nevada. We praise the Lord for his goodness. They came, not as we expected, on the Pacific Railroad, and it cost them altogether, stage and car travel, nearly $100, to get home. They left the cattle camp and Mr. Hetfield, at Ellsworth, Nevada. They enjoyed the trip in spite of all the dangers and privations. They crossed deserts, one forty miles long, driving day and might, sometimes for nearly twenty four hours without food, and the animals without water, and what the man had to drink was very poor indeed. They encountered boiling hot springs, and went over the beds of lakes, which seemed to be nothing but dried up salt-beds. There are many Indians in the vicinity of the present camp the Pi-utes- but only a mining camp of white men, and the mines are said to be rich in gold and silver. (T.S.R. 55. 2 P.M. 78. S.S. 72.) Sept. 6. Wednesday. This is State Election day, and the Republicans are triumphant at these polls. Mrs. Thomas called here this afternoon. We have attended the Lodge this eve, and such an unearthly noise as the bummers mad around the saloon and tavern, I hope never to hear again. Drinking, carousing and gambling are going on this evening. (T.S.R. 50. 2 P.M. 74. S.S. 65.) Sept. 7. Thursday. John Calvin begins to mend in health. He has had a long sickness, and is very thin in flesh. He is so weak that he cannot walk without staggering. The Republican ticket is victorious in the State. We have attended the prayer meeting. (T.S.R. 50. 2 P.M. 75. S.S. 68.)