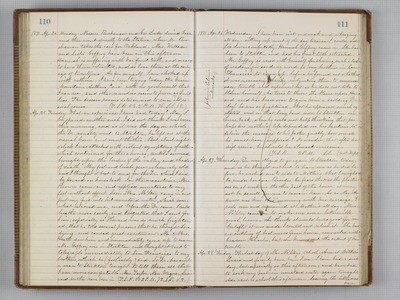 1871.Apr. 24. Monday. Messrs. Buchanan and Geo. Locke dined here and then went directly to the Station, where Mr. Buchanan takes the cars for Oakland. Mrs. Walla1ce and Sister Geffroy have been in this afternoon. Hannah is suffering with her front teeth, and means to have them extracted, and so lose them at the early age of twenty one. As for myself, I am choked up with asthma. I have been trying today the "Green Mountain Asthma Care" with no good result that I can see, and other remedies seem to prove as fruitless. The disease seems determined to run its usual course. (T.S.R. 53. 2 P.M. 76. S.S. 68.) Apr. 25. Tuesday. What an experience I have had today! May I be spared another such. I did not think I was worse this morning, and as it was the day on which the Dr. usually went to Stockton, he left us at the usual hour and went thither. But about eight o'clock I was attacked with violent symptoms of asthma which continued for three hours, until I seemed brought upon the borders of the "valley and shadow of death." My feet and limbs grew excessively cold and I thought it best to send for the Dr. which I did by Howard on horseback. In the mean-time, Mrs. Brown came in and applied mustard to my feet without effect. Soon Mrs. McStay came in and put my feet into hot mustard water, which somewhat relieved me, and before the Dr. came, I could breathe more easily, and I regretted that I sent for him, especially as Howard was so much frightened, that he told several persons that he thought I was dying, and caused great excitement. Mr. & Mrs. Heath saw him and immediately came up to see me Mr. Geffroy was in Stockton, and thought it best to telegraph immediately to San Francisco to my brothers, which he (foolishly) did. So Dr. has sent a man to Stockton tonight to tell them all that I am more comfortable. Mrs. Taylor, Mrs. Wagner, Susie and Mother have been in. (T.S.R. 50. 2 P.M. 73. S.S. 63.) 1871. Apr. 26. Wednesday. I have been sick and weak and wheezing all day - sitting up most of the day because I could not lie down comfortably. Hannah Geffroy came in. She has been to Stockton and had her front teeth extracted. Mr. Geffroy is vexed with himself for showing such a lace of wisdom in sending word to my brothers in San Francisco to come up, before he found out whether it was necessary thereby subjecting them to unnecessary trouble and expense but as he does not like to blame himself, he tries to throw the blame upon Howard, and has been over to give him a scolding. Poor boy! he was so frightened, that he appeared much agitated, and in that long, hard ride to Stockton on horseback, when he could not help thinking that perhaps his mother's life depended on his exertions to deliver the message to his father quickly, how much he must have suffered! No wonder, that after he did arrive, he should be almost overcome. (T.S.R. 2 P.M. S.S. (not kept)) Apr. 27. Thursday. Dr. was obliged to go again to Stockton today, and as he thought not best to leave me as he did before, he wished me to ride to Mother's, that I might be under her care. Besides, he fears that as the plasterers are at work in the other part of the house, it may not be so well for me to remain here. So as Mr. Andrews was here this morning with his carraige, I rode over and remained at Mother's all day. Mrs. McStay came in to make me some buttermilk gruel, because she thinks it would be so good for me but after it was made I could not relish it. She has an inkling of bad news from home, connected with her son Charles, but she knows not the extent of her trouble. Apr. 28. Friday. The last day of Mr. McStay's school. Am at Mother's Susie and family have been here. I have had a sick day, but especially so this afternoon, and have had to soak my feet in mustard water again tonight. Ada went to school this afternoon, leaving the little ones here.