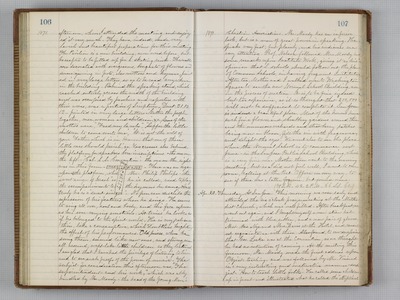 1871. afternoon, when I attended the meeting, and enjoyed it very much. They have, indeed, made very lavish and beautiful preparations for this meeting. The Pavilion is a new building, never used before, but hereafter to be fitted up for a skating rink. The walls are decorated with evergreens, bouquets of flowers we some growing in pots, also mottoes and hymns, printed in very large letters, so as to be read any where in the building. Behind the speaker's stand, which reached entirely across the width of the building and was occupied by preachers and reporters with their wives, was a portion of Scripture Duet. 31. 12. 13 printed in very large letters. "Gather the people together, men, women and children," etc. Some of the mottos were, "Feed my lambs," "Suffer the little children to come unto me," "It is not the will of your Father which is in Heaven that one of these little ones should perish," etc. Two crosses also behind the platform for speakers bore inscriptions the one on the left "Cal. S.S. Convention." - the one on the right was in this form. Many in name one in Christ. There was an organ upon the platform, which Mr. Philip Philips the "sweet singer of Israel" as he is called, used to play the accompaniments to the hymns he sung. And truly he is a "sweet singer." No pen can describe the expression of his features when he sings. He seems to sing all over, soul and body, and his face expresses his ever - varying emotions. At times he looks as if he belonged to the spirit world. He is very pale and thin, like a consumptive, which doubtless heighten the effect of his performances. Old pieces, when he sung them, seemed like new ones, and strong man all around, wept like little children as they listened I am glad that I have had the privilege of listening to him and to see such proofs of the power of music. The subject for consideration this afternoon was, "The superintendent and his work, "which was ably handled by Mr. Moody the head of the young Men's 1871. Christian Associations. Mr. Moody has an inferior look, but is a man of great power in speaking. He speaks very fast, but plainly, and his audiences are very attentive. Prof. Nelson followed Mr. Moody is some remarks upon Institute Work, giving it as his opinion that S. schools should follow out the plan of Common Schools, in having frequent Institutes. After tea, Mother and I walked over to Washington Square to see the new Normal School Building, now in the process of erection. It is to be fine indeed but too expensive, as it is thought that $200,000 will not be sufficient to complete it. San Jose is indeed a beautiful place. Most of the houses have such fine flower and shrubbery gardens around them and the numerous orchards and strawberry patches being now in bloom, fill the air with fragrance, and delight the eyes. We went also to see the place where the Normal School is to commence next June in the San Jose Public School Building, which is a very fine one. Mother then went to the evening meeting, but as I did not feel well, I went to our room, calling at the Post Office on my way, to see if there was a letter for me, but found more. (T.S.R. 42. 2 P.M. 66. S.S. 60.) Apr. 20. Thursday. At San Jose. This morning we rose early and attended the six o'clock prayer meeting at the Methodist Church, which was well filled. After breakfast, we went out again, and I bought myself a new straw hat trimmed with blue ribbon, and a new pair of gloves. Met. Mrs. Nye and Mrs. Davis at the Hotel, and renewed acquaintance with them. Also found, to our surprise that Geo. Locke was at the Convention, as we thought he had no intention of coming. At the meeting this forenoon, Mr. Moody made the first address upon Object teaching, and was followed by Mr. Vincent in a very interesting and instructive manner subject. "How to teach little folks." He called some children up in front and illustrated what he called the "elliptical