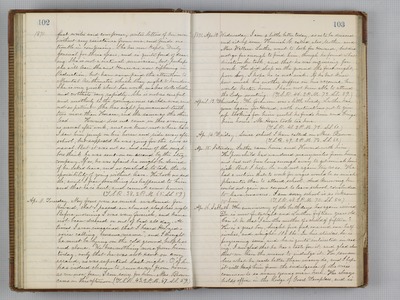 1871. fast writer and composer, writes letters of her own without any assistance from me, and finds no trouble in composing. She has now kept a Daily Journal for three years, and is quite fond of drawing. She is not a natural musician, but perhaps she will learn. She and Horace are now ciphering in Reduction, but have never paid the attention to Mental arithmetic which they ought to have done. She is very quick about her work, makes dolls clothes and crotchets very rapidly. She is not as careful and motherly to the younger ones as Ada was, and not so patient. She has eight permanent teeth, two more than Horace, and the same as the others had. Howard does not come in this evening as usual after work, and we know not where he is I saw him jump on his horse and ride away after school, but supposed he was going for the cows as usual. But it was not so, and some of the neighbors think he was sent on an errand by the stage company. If so, he was afraid he might be denied if he asked leave, and so concluded to take the responsibility of going without leave. He took no saddle, and I fear something has happened to him and that he is hurt and cannot come home. (T.S.R. 38. 2 P.M. 65. S.S. 59.) Apr. 11. Tuesday. My fears were so much awakened for Howard, that I passed an almost sleepless night, Before morning I was very feverish, and have not been dressed or out of bed all day. At times I even imagined that I heard Howard's voice calling "mama, mama", and I thought he must be lying on the cold ground, helpless and alone. We hear nothing more from him today, only that he was not sent on any errand, as was reported last night. O if he has indeed chosen to seem away from home, as we now fear, I am sorry for him. Mrs. Brown came in this afternoon. (T.S.R. 43. 2 P.M. 67. S.S. 59.) 1871. Apr. 12. Wednesday. I am a little better today, so as to be dressed and sit up some. Hannah G. called also Mother and Mrs. Wallace. Luther went to look for Howard, but did not go for enough to find him, though he found what direction he took, and that he was inquiring for work. He did sleep on the ground the first night poor boy, I hope he is not sick. If he but knew how much his mother suffers on his account, he would hasten home. I have not been able to attend the Lodge meeting. (T.S.R. 46. 2 P.M. 73. S.S. 59.) April. 13. Thursday. The forenoon was a little cloudy. Luther has gone again for Howard, with instructions not to give up looking for him until he finds him and brings him home. Mr. Horic took tea here. (T.S.R. 48. 2 P.M. 73. S.S. 61.) Apr. 14. Friday. Since school I have called on Mrs. Brown. (T.S.R. 49. 2 P.M. 73. S.S. 65.) Apr. 15. Saturday. Luther came home and Howard with him. The poor child had wandered many miles from home and had not been long enough away to get much home sick. But I hope he will not again try us so. He had a nation that to work for wages would be so much pleasanter than to attend school. And knowing he could not gain our consent to leave school concluded to leave unawares. I am sorry school is so irksome to him. (T.S.R. 48. 2 P.M. 70. S.S. 54.) Apr. 16. Sabbath. The anniversary of the birthdays has again arrived Dr. is now forty eight and Luther fifteen years old. Can it be that I am the mother of a child of fifteen? He is a great boy, height five feet, one and one half inches, and weight 106 lbs. In his studies, he is progressing some, and he is quite interested in reading. I am glad that he has a taste for it, and glad also that we have the means to indulge it. He remembers what he reads better than many do, and I hope it will keep him from the indulgence of the vices common to so many young men here. He always holds office in the Lodge of Good Templars, and is