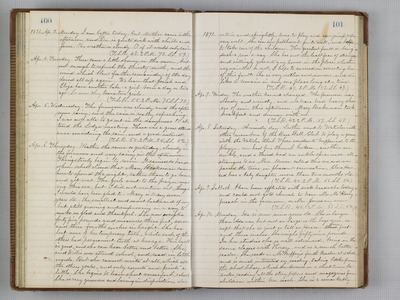 1871.Apr. 3. Monday. I am better today, but Mother came in the afternoon, and Dr. is quite sick with chills and fever. The weather is cloudy. O if it would only rain. (T.S.R. 48. 2 P.M. 70. S.S. 59.) Apr. 4. Tuesday. There came a little shower in the morn, but not enough to refresh the thirsty earth, and the wind which blew for the remainder of the day dried all up again. We learn that Josiah and Eliza have another babe - a girl - born a day or two ago. So now they have two girls. (T.S.R. 55. 2 P.M. 75. S.S. 70.) Apr. 5. Wednesday. The forenoon was cloudy and the afternoon rainy, and the rain is really refreshing. I was not able to go out in the dampness to attend the Lodge meeting. There was a good attendance considering the rain, and a good interest. (T.S.R. 50. 2 P.M. 55. S.S. 52.) Apr. 6. Thursday. Weather the same as yesterday, cloudy in the forenoon and very rainy in the afternoon. Things truly begin to revive. It rained so hard when school closed that Mary Brakeman came here to spend the night, rather than to go home and get wet. The girls went to the prayer-meeting this eve, but I did not venture out, though I would have been glad to. Mary is today seven years old - the smallest and most backward of any but still growing and improving in a way to make us glad and thankful. She now weighs forty five pounds and measures three feet, seven and three-fourths inches in height. She has lost none of her temporary teeth, while each of the others had permanent teeth at her age. Her health is good, and she can hear better and better. She and Willie now attend school, and read in little words. But she cannot write at all, which all the others could, and only counts and prints a little. She begins to learn short verses for S. school. She is very generous and loving in disposition, also 1871.active and sprightly, loves to play and can jump rope very well. She can sew patchwork quite well, and helps to take care of the children. Her greatest fault is being such a run-a-way. She has not the least fear of stranger and willingly goes into any house in the place, whether acquainted or not. I hope to succeed in conecting her of this fault. She is very restless and nervous, and dislikes to remain in any one place long at a time. (T.S.R. 49. 2 P.M. 53. S.S. 49.) Apr. 7. Friday. The weather has not changed. The forenoon was cloudy and windy, and we have had heavy showers of rain this afternoon. Mary Brakeman took breakfast and dinner with us. (T.S.R. 42. 2 P.M. 57. S.S. 48.) Apr. 8. Saturday. A windy day. Luther went to Waterloo with other members of the Base Ball Club to play a game with the Waterloo Club. Three accidents happened to the players - one had his thumb broken, another an ankle, and a third had an ankle sprained - all strangers to us. Mrs. Miner called this eve, and we passed the time in pleasant conversation. Clara Howard has a baby daughter more than two months old. (T.S.R. 40. 2 P.M. 56. S.S. 54.) Apr. 9. Sabbath. I have been afflicted with sick headache today and could not go to church to hear Mr. McReery preach in the forenoon, or Mr. Jones in eve. (T.S.R. 40. 2 P.M. 61. S.S. 54.) Apr. 10. Monday. Ida is now nine years old. She is larger than Ada was, but not so large as the boys were, except that she is just as tall as Horace - four feet and three inches. She weighs fifty nine pounds. In her studies she is well advanced, being in the same classes with Horace, and is a much better reader. She reads in McGuffey's fourth reader at school and is much interested in reading, taking books from the school library, which she devours in a short time, besides reading all the story papers and magazines for children within her reach. She is a remarkably