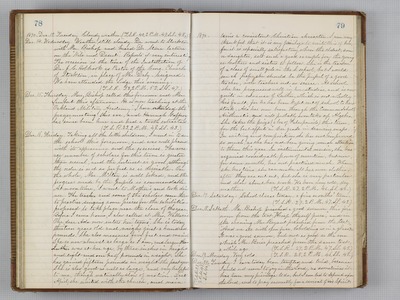 1870. Dec. 13. Tuesday. Cloudy weather. (T.S.R. 40. 2 P.M. 49. S.S. 48.) Dec. 14. Wednesday. Weather still cloudy. Dr. went to Stockton with Mr. Bishop and heard Dr. Stone lecture on the "Nile and Desert." Reports it very interesting. The occasion is the time of the Installation of Dr. J. C. Holbrook as Pastor of the Cong. Church of Stockton, in place of Mr. Daly - resigned. We have attended the Lodge this evening. (T.S.R. 32. 2 P.M. 52. S.S. 47.) Dec. 15. Thursday. Mrs. Bishop called this forenoon and Mr. Lambert this afternoon. He is now teaching at the "Oakland Military Academy." I have attended the prayer meeting this eve, and Hannah Geffroy has since been here and had a tooth extracted. (T.S.R. 33. 2 P.M. 48. S.S. 43.) Dec. 16. Friday. Taking all the little children, I went in to see the school this forenoon, and was well pleased with its appearance and the exercises. The average number of scholars for this term is greater than usual, and the interest is good, although the order is not so perfect as is desirable. On the whole, Mr. McStay is well liked, and the progress made by the pupils is commendable. At noon time, I went to Mother's and took dinner. The teacher and some of the scholars came there to practise singing some pieces for the exhibition proposed to take place near the close of the year. Before I came home, I also called at Mrs. Wallace's. Our dear Ada now enters her "teens". She is today thirteen years old and weighs just a hundred pounds. She also measures five feet and one inch She is now almost as large as I am, and larger than Luther was at her age, by three inches in height and eight and one half pounds in weight. She has gained fifteen pounds in weight the past year. She is also good as well as large, and very helpful to me, though naturally slow of motion. Last April, she united with the church, and maintains 1870. a consistent Christian character. I am very thankful that it is my privilege to write this of her, for it is especially satisfactory, when the eldest, son or daughter, sets such a good example for the younger brothers and sisters to follow. She is the teacher of a class of small girls in the S. school, but I would much prefer she should be the pupil of a good teacher, were teachers not so scarce. At school, she has progressed well in her studies, and is now quite in advance of Luther, which is not wholly his fault, for he has been kept out of school to heed stock. Ada has now been through the Common School Arithmetic, and will probably soon take up Algebra. She takes the prize (a box of Faber pencils) this term, for the best efforts in her grade in drawing maps. In writing and composition she has not improved so much, as she has not been giving much attention to them this year. In instrumental music, she has acquired considerable power of execution, but now, for some months, has not practised much. When she has time, she can make all her own clothes, after they are cut out, but she is very particular and slow about her work. We have very cold, dry weather. (T.S.R. 27. 2 P.M. 46. S.S. 42.) Dec. 17. Saturday. Scho (T.S.R. 27. 2 P.M. 47. S.S. 43.) Dec. 18. Sabbath. Mr. Bishop preached a good sermon this forenoon from the text, "Keep thyself pure," and in the evening Mr. Bryant preached from the text, "And we all with open face, beholding as in a glass, etc. It was a good sermon, but not as good as the one which Mr. Brier preached from the same text, a while ago. (T.S.R. 27. 2 P.M. 47. S.S. 45.) Dec. 19. Monday. Very cold. (T.S.R. 25. 2 P.M. 46. S.S. 45.) Dec. 20. Tuesday. I have today been tempted and tried, because I could not seem to joy in the Lord, as sometimes it has been my privilege to do, but I am led to depend upon the Lord, and to pray earnestly for a revival of His Spirit. (T.S.R. 28. 2 P.M. S.S. 44.)