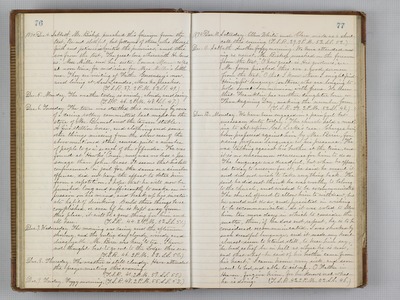 1870. Dec. 4. Sabbath. Mr. Bishop preached this forenoon from the text," Be not slothful, but followers of them, who through faith and patience inherited the promises," and this eve from the text, "The great love where with He loved us." Mrs. Miller and her sister. Emma Moore. called at noon time, for medicine for Mrs. Miller's little one. They are visiting at Father Guernsey's now, and living at San Leandro, where he preaches. (T.S.R. 37. 2 P.M. 53. S.S. 49.) Dec. 5. Monday. The weather today is windy, cloudy and rainy. (T.S.R. 46. 2 P.M. 48. S.S. 47.) Dec. 6. Tuesday. The town was startled this morning by news of a daring robbery committed last night on the store of Mr. Brumel and the tavern stable. A fine stallion horse, and clothing and some other things missing from the show case of the above mentioned store, caused quite a number of people to go in search of the offender. He was found at Hawk's Corner, and was no less a personage than John Cross. It seems that his late confinement in jail for the same or a similar offense, did not have the effect to deter him from a repetition. I hope that he will now be punished long and sufficiently to make an impression on his mind, and break up his inveterate habit of drinking. Could these things be accomplished, or even if he is kept away from this place, it will be a good thing for him and all here. (T.S.R. 44. 2 P.M. 52. S.S. 51.) Dec. 7. Wednesday. The morning was rainy and the afternoon showery, and the entire day cloudy, windy and disagreeable. Mr. Brier was here to tea. I have not thought best to go out to the Lodge this eve. (T.S.R. 46. 2 P.M. 53. S.S. 50.) Dec. 8. Thursday. The weather is still cloudy. Have attended the prayer meeting this evening. (T.S.R. 40. 2 P.M. 59. S.S. 55.) Dec. 9. Friday. Foggy morning. (T.S.R. 48. 2 P.M. 55. S.S. 53.) 1870. Dec. 10. Saturday. Ellen White and Clara made us a short call this evening. (T.S.R. 39. 2 P.M. 53. S.S. 52.) Dec. 11. Sabbath. Another foggy morning. We have attended meeting as usual. Mr. Bishop preached in the forenoon from the text," O how great is His goodness," etc. Mr. Jones preached this eve a good sermon from the text," O that I knew where I might find Him," etc. fit language for those who are longing to hold sweet communion with Jesus. We learn that Franklin has another daughter born on Thanksgiving Day, making the number four. (T.S.R. 39. 2 P.M. 52. S.S. 48.) Dec. 12. Monday. We have been engaged in a painful but necessary duty today. The church held a meeting to act upon Geo. Locke's case. Charges have been preferred against him by Mr. Brier, for using profane language in his presence. He was talking against his brother at the time, and it is no uncommon occurrence for him to do so. The language was dreadful, but when he appeared today to answer for it, he said he meant it and did not wish to take anything back. He said he did not think he was worthy to belong to the church, and wished to be excommunicated. The church offered to allow him to withdraw, but he would not do so, and persisted in wishing to be excommunicated. So it was voted to allow him ten more days in which to consider the matter, then, if he does not repent, he is to be considered excommunicated. I was shocked by such dreadful language, and it made my heart almost seem to stand still, to hear him say, "he had as lief be in hell as where he is now," and that what he said of his brother" came from his heart." I came home very sick, and soon went to bed, not able to sit up. O Father in Heaven, forgive him, for he knows not what he is doing." (T.S.R. 43. 2 P.M. 52. S.S. 46.)