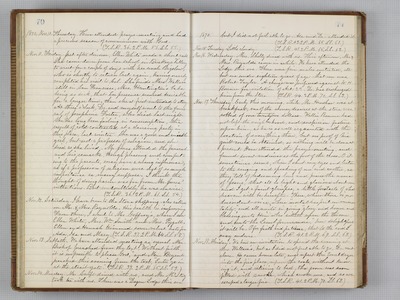 1870. Nov. 10. Thursday. Have attended prayer-meeting and had a precious season of communion with God. (T.S.R. 36. 2 P.M. 56. S.S. 55.) Nov. 11. Friday. Just after dinner, Ellen White made a short call. She came down from her school in Buckeye Valley to visit for a couple of days with her uncle Bigelow, who is shortly to return East again, having nearly completed his visit to Cal. She finds Mrs. Wallace still in San Francisco, Mrs. Huntington's babe being so sick, that her presence seemed desirable for a longer time, than she at first intended to stay. At three o'clock, Dr. and myself went to the funeral of Josephine Foster, who died last night. She has long been failing in consumption, the result of a cold contracted at a dancing party in this place, last winter. She was a good and amiable girl, but not a professor of religion, and she died as she lived. Mr. Jones attended the funeral and his remarks, though pleasing and comforting to the parents, may have a wrong influence, as if a profession of religion were not of so much importance as many suppose. I think the thought of doing harm was far from Mr. Jones' intentions. But undoubtedly he was unwise. (T.S.R. 36. 2 P.M. 61. S.S. 54.) Nov. 12. Saturday. I have been to the Store shopping - also called on Mr. & Mrs. Reynolds. His health is improving. From there, I went to Mr. Geffroy's, where I saw Ellen White, Mrs. Wm. Smith and Mrs. Pygall, Ellen and Hannah trimmed some velvet hats for Ada, Ida and Mary. (T.S.R. 37. 2 P.M. 64. S.S. 58.) Nov. 13. Sabbath. We have attended meeting as usual. Mr. Bishop preached from the text, "Without faith, it is impossible to please God," and Mr. Bryant preached this evening from the text, "Enter ye in at the strait gate." (T.S.R. 39. 2 P.M. 65. S.S. 59.) Nov. 14. Monday. Mr. Swift dined with us, and Mr. McStay took tea with us. There was a Degree Lodge this eve. 1870. but I did not feel able to go. Ada and Dr. attended it. (T.S.R. 43. 2 P.M. 65. S.S. 61.) Nov. 15. Tuesday. Little cloudy. (T.S.R. 41. 2 P.M. 65. S.S. 62.) Nov. 16. Wednesday. Mrs. Shelly dined with us. This afternoon, Mr. & Mrs. Reynolds came in awhile. We have attended the Lodge this eve. There were five males initiated, all but one under eighteen years of age - that one was Robert Taylor. A charge was preferred against W. H. Bonner for violation of Act. 2d. Dr. has discharged him from the Store. (T.S.R. 44. 2 P.M. 70. S.S. 63.) Nov. 17. Thursday. Early this morning, while Mr. Henshaw was at breakfast, one of the money drawers at the store was robbed of over twenty two dollars. Willie Bonner had not left the neighborhood, and suspicion fastens upon him, as he is so well acquainted with the location of everything there, but no proof of his guilt could be obtained, so nothing will be done at present. Have attended the prayer-meeting, and found sweet audience as the foot of the cross. O it sometimes seems, when I shut my eyes and listen to the singing and speaking of one and another, as they tell of redeeming love and praise the name of Jesus, that all is light and glorious about me and I get a faint glimpse, a little foretaste of what heaven will be hereafter. There, where there is no discordant voice, where mortal has put on immortality," and all unite in giving "glory and honor and blessing unto Him who sitteth upon the throne, and unto the Lamb forevermore, "how delightful it will be. O for faith and patience, that to the end I may endure. (T.S.R. 41. 2 P.M. 69. S.S. 63.) Nov. 18. Friday. We had an invitation to spend the evening at Mrs. Wallace's, but as I did not ful able to go, Dr. went alone. He came home late, and upset the towel`-dryer into the fire place, upon the coals, without knowing it, and retiring to bed, the room was soon filled with smoke, which awoke me, and so we escaped a larger fire. (T.S.R. 41. 2 P.M. 70. S.S. 63.)