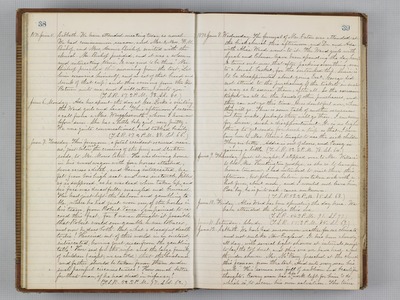 1870. June 5. Sabbath. We have attended meeting today as usual. We had communion season, and Mr. & Mrs. F. M. Bishop, and Mrs. Annie Bishop united with the church. Mr. Bishop presided, and it was a solemn and interesting time, "It was good to be there." Mr. Bishop preached this morning from the text, "Let him examine himself, and so eat of that bread and drink of that cup," and this evening from the text "Return unto me, and I will return unto you." (T.S.R. 57. 2 P.M. 93. S.S. 80.) June 6. Monday. Ada has spent the day at Geo. Locke's visiting the Ward girls and Sarah. This afternoon I received a call from a Mrs. Wrigglesworth, whom I have not before seen. She has a little baby girl, very pretty. We were quite conversational, and talked busily. (T.S.R. 57. 2 P.M. 88. S.S. 66.) June 7. Tuesday. This forenoon, a fatal accident occurred near us, just below or at the crossing of the ferry and Stockton roads, to Mr. Moses Eaton. He was driving home in his wood wagon with four horses attached, drove across a ditch, and being intoxicated, he fell from his high seat and was instantly killed as is supposed, as he was dead when taken up, and his face was dread fully mangled and bruised. He had just left the Saloon and gambling table, where he had just won one of the horses in his team, from Robert Vance. I am pained to record this fact, for I never thought it possible that Robert would ever gamble or use tobacco, and now he does both. But what a dreadful death to die! Hurried out of this world in an instant, intoxicated, having just risen from the gambling table! How sad for the wife and the large family of children (eight, we are told) that the husband and father should be taken from them under such painful circumstances! How much better for that man, if he had died in infancy! (T.S.R. 52. 2 P.M. 77. S.S. 62.) 1870. June 8. Wednesday. The funeral of Mr. Eaton was attended at the brick church this afternoon, and Dr. and Ada with Alice Ward went to it. The Ward girls with Sarah and Elmer have been spending the day here. It turns out now, that after packing everything, even to a lunch-basket, for the intended trip, Susie is to be disappointed about going East. George did not attend to the purchasing of the tickets in such a way as to secure them, after all. So the excursion tickets are all in the hands of other purchasers, and they can not go this time. It is doubtful now, when they will go. There is some talk of another excursion in two weeks, perhaps they will go then. I am sorry for Susie, such a disappointment. It is no light thing to get ready for such a trip as that. I have been over to Mrs. Brown's to night to see the sick children. They are better. Addie is out of doors, and Pussy is gaining a little. (T.S.R. 52. 2 P.M. 78. S.S. 64.) June 9. Thursday. Just at night, I stepped over to Mr. Wallace's to bid Mrs. Huntington goodbye, as she is to leave for home tomorrow. I had intended to visit there this afternoon, but Johnny Calvin was taken sick with a hot fever, about noon, and I would not leave him. Poor boy, he is quite sick cause unknown. (T.S.R. 52. 2 P.M. 85. S.S. 68.) June 10. Friday. Alice Ward has been spending the day here. We have attended the Lodge this eve. (T.S.R. 54. 2 P.M. 91. S.S. 77.) June 11. Saturday. Cloudy. (T.S.R. 55. 2 P.M. 85. S.S. 69.) June 12. Sabbath. We have had uncommon weather for our climate, and not unlike New England. It has been cloudy all day, with several light showers at intervals, enough to lay the top dust, and this eve we have had a real thunder shower. Mr. McReery preached at the church this forenoon from the text, "And into every man his work." His sermon was full of sublime and beautiful thoughts. Every man has a life work left for him to do, which is, to secure his own salvation. The time