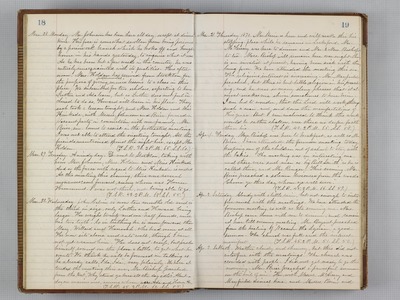 Mar. 28. Monday. Mr. Johnson has been here all day, except at dinner time. His fare is somewhat swollen from being poisoned by a poison oak branch which he broke off and brought home in his hands yesterday, to inquire what it was. As he has been but a few weeks in the country, he was entirely unacquainted with its qualities. This afternoon. Mrs. Holden has arrived from Stockton, for the purpose of giving instrumental music lessons to a class in this place. We subscribed for two scholars, expecting to have Luther and Ada learn, but as Luther does not feel inclined to do so, Howard will learn in his place. They each took a lesson tonight, and Mrs. Holden and Miss. Kinkade, with Messrs. Johnson and Brier, formed a pleasant party in connection with our family. Mr. Brier, sen. comes to assist in the protracted meeting. I was not able to attend the meeting tonight. All the friends mentioned spend the night here, except Mrs. Holden. (T.S.R. 36. 2 P.M. 65. S.S. 60.) Mar. 29. Tuesday. A windy day. Dr. went to Stockton, taking with him Mr. Johnson, Mrs. Holden and Miss Kinkade. And so the farce with regard to Miss Kinkade is ended. At the meeting this evening, there were several mourners came forward, among whom was Horace Hammond. I was not there, not being able to go. (T.S.R. 42. 2 P.M. 68. S.S. 55.) Mar. 30. Wednesday. John Calvin is now ten months old and is the third in size, only Luther and Howard being larger. He weighs twenty and one-half pounds, and has two teeth. So in teething he is more forward than Mary, Willard and Hannah, who had none at all. He now sits alone and eats well, though I have not yet weaned him. He does not creep, but pushes himself round on the floor a little, to get what he wants. We think he will be forward in talking as he already calls, "Ida, Ida," very plainly. We have at tended the meeting this eve. Mr. Bishop preached from the text, "Why stand ye here all the day idle?" About a dozen anxious ones, among whom were Ada and Hocaer H. (T.S.R. 45. 2 P.M. 60. S.S. 55.) Mar. 31. Thursday. 1870. Mr. Brier is here and will make this his stopping-place while he remains in Locke ford. Mr. McCreery was here to dinner and Mr. & Mrs. Bishop to tea. Mrs. Bishop will remain here over night. She is an invalid at present, having been sick with the lung fever. We have attended the meeting this eve. The religious interest is increasing. Mr. Mayfield preached, but there is but little religion in his preaching, and he uses so many slang phrases that it at most makes me shiver sometimes to hear him. I am led to wonder, that the Lord will work through such a man, and send down the manifestations of His grace. But I am inclined to think the work would be rather shallow, were there no deeper faith than his. (T.S.R. 40. 2 P.M. 65. S.S. 58.) Apr. 1. Friday. Mrs. Bishop was here to breakfast, as well as Mr. Brier. I have attended the forenoon meeting today, keeping one of the children out of school to stay with the babies. The meeting was an interesting one, and there were such men as "big Bill Smith" as he is called there, and Mr. Ringer. This evening, Mr. Brier preached a solemn discourse from the words Choose ye this day whom ye will serve. (T.S.R. 45. 2 P.M. 66. S.S. 59.) Apr. 2. Saturday. Cloudy with a little rain, but not enough to interfere much with the meetings. We have attended the forenoon meeting, as well as the evening one. Mrs. Bishop came home with me to dinner, and remained here till evening meeting. Mr. Bryant preached from the healing of "Naaman the Syrian," a good sermon. The church was full and the interest manifest. (T.S.R. 45. 2 P.M. 51. S.S. 50.) Apr. 3. Sabbath. Weather cloudy and showery, but this did not interfere with the meetings. The church was crowded with people. I did not get ready to go this morning. Mr. Brier preached a powerful sermon on the "evil of sin." He with Messrs. McCreery and May field dined here, and Messrs. Brier and