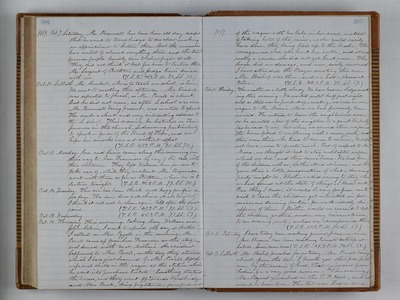 1869. Oct. 9. Saturday. Mr. Bramall has been here all day, except that he went to Woodbridge to see about making an appointment to lecture there. But the rummies have control of almost everything there, and the temperance people hardly dare to show fight at all. They did not think it best for him to lecture there. Mr. Sargent of Stockton and Judge Cavis dined with us. (T.S.R. 46. 2 P.M. 80. S.S. 70.) Oct. 10. Sabbath. Mr. Lambert, who is to teach our school, is here. We went to meeting this afternoon. Mr. Bishop was expected to preach, as Mr. Powell is absent. But he did not come, so after S. school was over Mr. Bramall being present, was invited to speak. He made a short and very interesting address to the S. school. This evening, he lectured on Temperance in the church, endeavoring particularly to speak in favor of the Band of Hope, and we hope his remarks were not without effect. (T.S.R. 48. 2 P.M. 81. S.S. 70.) Oct. 11. Monday. Geo. and Susie came along this morning on their way to San Francisco by way of the cars, with their children. They left Wallace here for me to take care of, while they are absent. Mr. Bramall went with them as far as Stockton, where he is to lecture tonight. (T.S.R. 46. 2 P.M. 79. S.S. 70.) Oct. 12. Tuesday. The air has been thick and hazy for five or six days. The sun does not shine at all brightly. I think it will not be clear again till after the first rains. (T.S.R. 47. 2 P.M. 77. S.S. 67.) Oct. 13. Wednesday. (T.S.R. 45. 2 P.M. 77. S.S. 67.) Oct. 14. Thursday. This morning, taking Mary, Wallace and John Calvin, I went to spend the day at Mother's. I called on Mrs. Pygall in the morning. Mr. Powell came up from San Francisco on the stage, and dined with us at Mother's. An accident happened to Mrs. Powell, on the day they started, which I have just learned of. Mr. Powell left his wife and child in the wagon at the station while he went into purchase tickets. Something started the horses, and they went off towards Woodbridge and Mrs. Powell, being frightened, jumped out 1869. of the wagon with her babe in her arms, instead of taking hold of the reins, as she could easily have done, they being tied up to the brake. The consequence was, she hurt her ankle, and it was really a wonder she did not get hurt worse. The horses did no damage, and were easily recovered. I have attended the Prayermeeting this eve. Mr. Bishop was there, and we had a pleasant time. (T.S.R. 44. 2 P.M. 76. S.S. 67.) Oct. 15. Friday. The weather is a little cloudy. We have had no Lodge meeting this evening. We waited until half past eight, and as there was no prospect of a meeting, we rode in our wagon to Mr. Moore's, where we had previously been invited. He intends to leave the neighborhood soon, so he invited a few of the neighbors to a quiet tea party, (so he said to us), but when we arrived there we found the house filled to overflowing with a merry party, and there were those who tried to dance to music, but did not have room to operate much. Out of respect to Mr. Moore, we thought it best to stay until after supper, which we did, and then came home. We had four of the children with us, Luther staid at home - and this gave them a little imagination of what a dancing party might be. Whether we did wrong to stay when we had found out the state of things, I know not. One thing I know, it would be very far from me to wish to have the children get interested in promiscuous dancing parties, for we decidedly disapprove of them. Neither would we consent to let the children go there, under any circumstances, to an evening party, unless we accompanied them (T.S.R. 50. 2 P.M. 75. S.S. 67.) Oct. 16. Saturday. I have today been making quince preserves, and Mrs. Brown has been making tomato catsup, at halves. Susie came home. (T.S.R. 47. 2 P.M. 72. S.S. 62.) Oct. 17. Sabbath. Mr. Bishop preached for us today, Mr. Powell being absent, from the text, "I beseech you therefore, brethren, by the mercies of God, that ye present your bodies, etc. a very good sermon. This evening, Mrs. Bryant preached in the O. F. Hall, and we went to hear him. His text was, "God so loved