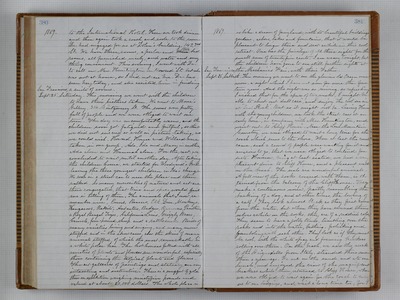 1869. to the International Hotel. Here we took dinner and then again took a coach and rode to the rooms Dr. had engaged for us at Dolan's building, 143, 3rd. St. We have three rooms, a parlor and two bedrooms, all furnished nicely, and water and everything convenient. This evening, I went with Dr. to call on Mrs. Huntington on Howard St. but she was not at home, so I did not see her. Dr. has seen her today, and she assisted him in finding San Francisco, a suite of rooms. Sept. 25. Saturday. This morning we went with the children to have their pictures taken. We went to Morse's Gallery, 314 Montgomery St. The rooms were pretty full of people and we were obliged to wait our teen. The day was uncomfortably warm, and the children soon got fatigued and fretful, so that we did not succeed so well in picture taking, as we could wish. Howard, Horace and Willard were taken in one group, Ada, Ida and Mary in another, Ada alone and Hannah alone. For the rest, we concluded to wait until another day. After taking the children home, we started for Woodward's Gardens leaving the three youngest children in Ida's charge. We rode in a street car to near the place and then walked. So many curiosities of nature and art are there congregated, that time and space would fail me in telling of them. The animals that I now remember were, Emus. Beavers, Elk, Deer, Monkeys, Kangaroos, Rabbits, Anteaters, Badgers, Raccoons, Panthers, a Royal Bengal Tiger, California Lions, Grizzly Bears, Camels, four-homed sheep and a rattle snake. Birds of many varieties living and singing, and many more stuffed and in the show-cases, also the skins of many animals stuffed, of which the most remarkable is a white polar bear. The hot-houses filled with all varieties of plants and flowers are wonderful, especially those containing the tropical plants and flowers. The art galleries of paintings and statuary are very interesting and instructive. There is a nugget of gold there on exhibition weighing ninetyfive pounds and valued at about 20,000 dollars. The whole place is 1869. so like a dream of fairyland, with its beautiful buildings gardens, arbors, lakes and fountains, that it would be pleasant to linger there and rest awhile in this cool retreat. One has the privilege of all these sights for the small sum of twentyfive cents. I am weary tonight, but the children have gone to see still further sights at San Francisco the Mechanics Fair, with their Father. Sept. 26. Sabbath. This morning we went to see the glorious old Ocean once more, a sight which I have not seen for more than fourteen years. And the sight was so reviving, so refreshing I wished that for the space of two weeks, I might be able to shut out "dull care", and enjoy the cool sea air at "Seal Rock." But so it might not be. Leaving Horace with the young children, we took the street cars at an early hour, in company with Mrs. Huntington, and went out to "Cliff House". Near the Lone Mountain Cemetery, we were obliged to wait a long time for the coach which runs to the shore. When at last the coach come, such a crowd of people were waiting for it and anxious to go, that we were obliged to contend for seats. However, being at last seated, we had a very pleasant drive to Cliff House, and a pleasant walk on the beach. The seals are wonderful animals. A full view of the rocks covered with them, is obtained from the balcony of the Cliff House. They make a continuous noise, partly resembling the barking of a dog, and at other times, the lowing of a calf. They look almost black as they first come from the water, but when they have sunned them selves awhile on the rocks, they are of a reddish color. They seem to have a jolly time, tumbling over the rocks and into the water, bathing, frolicking and gamboling with each other. They look as if they must be cool, with the white spray and framing breakers rolling over them. On the beach, we saw the wreck of the Brignadello from Italy, stranded there more than a year ago. We sat on the sands, and ate our lunch, and enjoyed the view of the magnificent breakers awhile, then returned to Cliff House, where we were obliged to wait again for the coach to carry us to our lodgings, and wait a long time too, for I