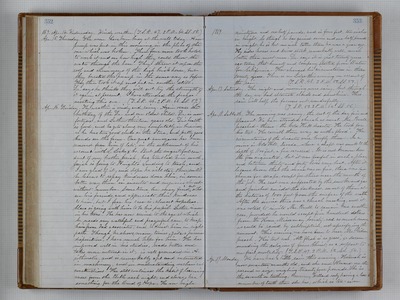 1869. Apr. 14. Wednesday. Windy weather. (T.S.R. 47. 2 P.M. 64. S.S. 58.) Apr. 15. Thursday. The men have been busy at the well today. A new pump was put in this morning, in the place of the one which was broken. Then four men took hold to work it and see how high they could throw the water through the hose. They threw it upon the roof and chimneys of the high brick house, but they bursted the pump in the same way as before. They then took it up and put in another still. Dr. says he thinks they will not try the strength of it again at present. I have attended the prayer-meeting this eve. (T.S.R. 46. 2 P.M. 66. S.S. 69.) Apr. 16. Friday. The weather is windy and rainy. Again occurs the birthday of the Dr. and our oldest child. Dr. is now fortysix, and Luther thirteen years old. Dr.'s health is good, and he gets along very comfortably in business, as he has two good clerks in the Store, and pretty good hands on the farm. One great annoyance has been removed from him of late, in the settlement of his account with L. Locke & Co. But the ungrateful conduct of my brother Josiah, has troubled him much. Josiah is going to Knight's Landing to teach, and I am glad of it, and hope he will stay there until he learns to replay kindness done him, in some better way than in insults and injuries almost without number. Sometime he may find out who are his friends, and appreciate their kindness to him, but I fear his case is almost hopeless. Clara is going with him to be his pupil. Luther is now in his "teens." He has now arrived to the age at which he needs very watchful and prayerful care, to keep him from bad associates, and to direct him in right paths. Though he shows, many times, quite a perverse disposition, I have much hope for him. He has improved well in his studies, reads better and takes more interest in it, is well grounded in Arithmetic, and is remarkably apt. and interested in machinery, and in understanding mechanical constructions. He still continues the habit of learning verses from the Bible each night, and always has something for the Band of Hope. He now weighs 1869. ninetyone and one-half pounds, and is four feet, ten inches in height. So though he has gained seven and one-half pounds in weight, he is but one inch taller than he was a year ago. He rides horses and drives stock remarkably well, much better than most men. Dr. says it is just twenty years ago today that himself and company started from Boston for California. How changed his circumstances in there twenty years. There is no Lodge this evening on account of the rain. (T.S.R. 48. 2 P.M. 53. S.S. 53.) Apr. 17. Saturday. The night and morning were rainy, but through the day we had alternate clouds and sunshine. This rain will help the farmers out wonderfully. (T.S.R. 53. 2 P.M. 64. S.S. 56.) Apr. 18. Sabbath. The morning was rainy, the rest of the day fair and pleasant. We have attended church as usual. Mr. Powell preached - theme - the Gold Hill disaster. He took for his text - "He carrieth them away as with a flood". The circumstances of the disaster were briefly there. In a mine in Gold Hill, Nevada, where a shaft was sunk to the depth of 1100 feet, a fire occurred. It is not known how the fire originated, but it was fearful in such a place, and between thirty and forty lives were lost. After it became known that the mine was on fire, there was no chance for escape, except for those near the mouth of the pit. The rest were suffocated by the smoke and gas and perished amidst the darkness, most of them at the distance of 1000 feet from the surface of the earth. After the service there was a church meeting and it was voted to invite Mr. Powell to remain here another year, provided he would accept five hundred dollars from the Home Missionary Society, and as much more as could be raised by subscription, not specifying the amount. This evening, we have been to hear Mr. Gibson preach. His text was, "All flesh is as grass," &.c recommending the religion of Jesus Christ, as a support to our frail mortality. (T.S.R. 49. 2 P.M. 62. S.S. 54.) Apr. 19. Monday. We have had a little rain this evening. Hannah is now seventeen months old, and she and Howard are the second in size, weighing twenty four pounds. She is the seventh in teething, however, Willard only having a less number of teeth than she has, which is ten - seven