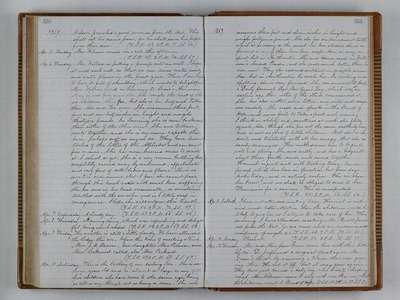 1869. Gibson preached a good sermon from the text, "Thou shalt call his name Jesus; for he shall save his people from their sins." (T.S.R. 43. 2 P.M. 71. S.S. 64.) Apr. 5. Monday. Mrs. Wilcoxon made me a call this afternoon. (T.S.R. 47. 2 P.M. 74. S.S. 67.) Apr. 6. Tuesday. Mr. Wallace is putting a pump into our well. I hope it will work well, so that we can raise water easily and water flowers in the front yard. Then I can hope to have it full of shrubbery, which would be delightful Mrs. Wallace called on her way to Susie's, this morn. Mary is now five years old. She weighs the least of the six children, thus far, but she is one-half inch taller than Ada and Ida were. She measures three feet, five and one-half inches in height and weighs thirtysix pounds. In learning, she is more backward than either of the others were. She and Willard recite together, and she is no more capable than he is, perhaps not so much so. They have learned twelve of the letters of the Alphabet and can count five or more. She has never learned verses to recite at S. school as yet. She is a very nervous, bustling body completely carried away by excitement, affectionate and very fond of dolls, babies and flowers. She is so sensitive and nervous, that I fear she cannot pass through this harsh word with much keen suffering. She has sores in her head occasionally, is sometimes trouble with the ear-ache, and is a little deaf in consequence. I hope she will out grow this trouble. (T.S.R. 50. 2 P.M. 70. S.S. 59.) Apr. 7. Wednesday. A cloudy day. (T.S.R. 47. 2 P.M. 66. S.S. 56.) Apr. 8. Thursday. Morning rainy, which was refreshing and delightful, being much needed. (T.S.R. 52. 2 P.M. 69. S.S. 58.) Apr. 9. Friday. The weather is still a little cloudy. We have attended the Lodge this eve, before the time of meeting which, Mrs. J. M. Brown, her daughter - Mrs. Brown, and Mrs. Lockwood called, also Mrs. Packard. (T.S.R. 47. 2 P.M. 68. S.S. 59.) Apr. 10. Saturday. This is the birthday of our darling Ida. She is now seven years old and is almost as large as any of the five children who have come to the same age, being as tall as any, though not so heavy as some. She now 1869. measures three feet and eleven inches in height and weighs fortynine pounds. She also has six permanent teeth, which is as many as the most. In her studies, she is as forward as any of them have been except Ada, in every respect but in Arithmetic. She and Horace read in Willson's Second Reader, and she reads much better than he does now. They also add and subtract in simple numbers, but in Arithmetic he excels her. In writing and spelling, she is very forward. She commenced to keep a Daily Journal last New Year's Day, which was at an earlier age than either of the others commenced at. She has also written some letters, and writes and composes readily. She reads and speaks in the Band of Hope, and never fails to take a part each evening. I think in ability and smartness at work, she fully equals Ada, though she has not the same motherly way and is not so fond of little children. But she is so docile and tractable with all her energy, that she is easily managed. Her ankle seems now to be quite well and strong. She sews neatly, and has a bedquilt about three-fourths made and sewed together. Hannah is quite sick with teething today. Our new pump, which has been in operation but four days, broke today, and is entirely useless. The air-chamber burst, and we shall be obliged to send to San Francisco for a new one. This is unexpected. (T.S.R. 45. 2 P.M. 68. S.S. 62.) Apr. 11. Sabbath. I have not attended meeting today. Hannah is sick and needs better attention than the children would be likely to give her, so I stayed to take care of her. This evening, I have attended meeting. Mr. Powell preached from the text, "Ye are come unto an innumerable company of angel, etc. (T.S.R. 48. 2 P.M. 70. S.S. 60.) Apr. 12. Monday. Pleasant. (T.S.R. 50. 2 P.M. 76. S.S. 71.) Apr. 13. Tuesday. Mr. and Mrs. Jesse Green came here with their little child. Dr. performed a surgical operation on Mr. Green's throat, by removing a tumor that was growing there. He cut it off, but it may grow again. They have just buried a baby boy, who died of whooping cough. Mrs. Wilcoxon came to stay with me this eve, while the children went to Band of Hope. (T.S.R. 55. 2 P.M. 77. S.S. 67.)