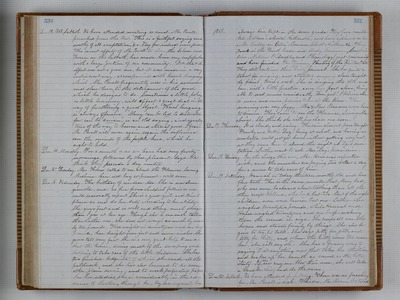 Dec. 13. 1868. Sabbath. We have attended meeting as usual. Mr. Powell preached from the text, " This is a faithful saying and worthy of all acceptation," etc. Very few indeed were present. The recent efforts of Mr. Powell to close the Saloon and Tavern on the Sabbath, has made him very unpopular with a large portion of our community. Not that the effort was not a good one, but it was made in a very indiscreet way, accompanied with harsh language which Mr. Powell frequently uses in his sermons and elsewhere, to the detriment of the good which he designs to do. Sometimes a little policy, a little leniency, will effect a great deal in the way of furthering a good object. Harsh language is always offensive. "Many can be led to destruction few can be driven," is an old saying, and equally true of the way to heaven and eternal good. I fear Mr. Powell will never again regain the influence over the minds of the people here, which he ought to hold. Dec. 14. Monday. For a month or so we have had very frosty mornings, followed by clear, pleasant days. We think they precede a dry winter. Dec. 15. Tuesday. Mrs. Thomas called to see about the Florence Sewing Machine. Can not buy at present will soon. Dec. 16. Wednesday. The birthday of our dear Ada. She is now eleven years old, and as free from childish follies as we could reasonably expect. She is a good girl, and tries to please us and do her duty according to her ability. She grows fast and is well and strong, much stronger than I was at her age. Though she is one inch taller than Luther was, she does not weigh as much by nearly ten pounds. Her weight is seventyone and one-half pounds, her height four feet and seven inches. She grows tall very fast. She is a very great help to me about the house, doing most of the sweeping and helping to take care of the little children. She has two finished bedquilts, of which she made all the patchwork, and she has also learned to do some other plain sewing, and to work perforated paper. In her studies, she is considerably in the advance of Luther, though he, by own request, has 1868. always been kept in the same grade. They have completed Colburn's Mortal Arithmetic, and have ciphered as far as Per Centage in Eaton's Common School Arithmetic. They read in the Fourth Reader and study Grammar, Composition, Natural Philosophy and Physiology (just commenced) and have finished The Primary History of the United States. They still continue their Daily Journals. She has quite a talent for singing, and attends a singing class taught by Josiah, twice a week. She is singing the alto, and cars, with a little practise, carry her part alone, being able to read music considerably. Dear girl! I believe she is more and more precious to his all the time. The morning was very foggy. Mr. & Mrs. Reasoner were here to dinner. They came to see the Florence Sewing Machines. She thinks she will purchase one soon. Dec. 17. Thursday. It is cloudy and rainy. The rain almost pours tonight. Franky and Hattie Day, being at school, and having no umbrella, could not get home without getting very wet, so they came here to spend the night at Dr.'s invitation. Luther went to ask Mrs. Day's permission. Dec. 18. Friday. In the Lodge this eve, Mr. Rice was reported sick, and the members are paying two dollars a day for a nurse to take care of him. Dec. 19. Saturday. Hannah is today thirteen months old and has four teeth. This is the same number that Mary had, who was more backward about teething than all the others except Willard, who had but two. But of the eight children, none were heavier but one – Luther - who weighed twentytwo pounds, while Hannah and Horace weighed twentyone and one-half-making them the second in size. She creeps all over the house and stands firmly by things. She also begins to try to talk. She says pitty for pretty and titty for kitty, and when the kitty comes too near her, she will say "oh." She has a funny way of saying "O" at anything new that takes her attention, and makes up her mouth as round as the letter itself. If she sees any one blow their nose, she will take a handkerchief and do the same. Dec. 20. Sabbath. We have attended S.S. today. There was no preaching for Mr. Powell is sick. This eve, Mr. Brown lectured