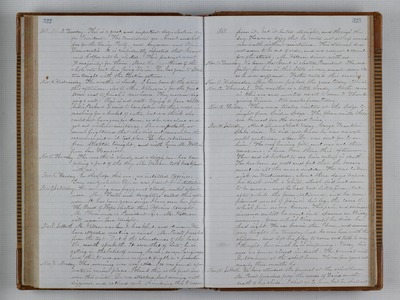 Nov. 3. Tuesday. This is a great and important day - election day for President. The candidates are- Grant and Colfax for the Union Party, and Seymour and Blair - Democratic. It is confidently expected that Grant and Colfax will be elected. This precinct went 71 majority for them. More than two - thirds of the whole vote cast here being Union. Dr. has gone to Stockton tonight with the Election returns. Nov. 4. Wednesday. The weather is cloudy. I have been to the store this afternoon, also to Mrs. Wilcoxon's for the first time and to Josiah's new house. They are now digging a well. Eliza is not well trying to have chills. Sadie Packard is said to have fallen into their well in reaching for a bucket of water, but we think she could not have gone far down, as she was alone and got out without assistance. She was probably so much frightened that she did not remember the occurrence just as it took place. Dr. has returned from Stockton tonight, and with him Mr. Wallace from San Francisco. Nov. 5. Thursday. The weather is cloudy, and a drizzly rain has been falling a part of the day. Mr. Wallace took breakfast with us. Nov. 6. Friday. In the Lodge this eve, we installed Officers. Every newly-elected Officer was present for installation. Nov. 7. Saturday. The morning was foggy and cloudy until about noon. Mr. Foster and daughters called this afternoon. It has been years since I have seen her before. The Band of Hope elected their Officers tonight. Mr. Plummer is President etc. Mr. Wallace will remain here tonight. Nov. 8. Sabbath. Mr. Wallace was here to breakfast and dinner. We have attended meeting as usual. Mr. Powell preached from the text. "Out of the abundance of the heart the mouth speaketh. It seems that, of date, he is getting in the habit of using, harsh, severe language, and this, to me seems unjustifiable in a preacher. Nov. 9. Monday. This morning was very colder. Ice was found upon water in various places. I think this is the first in seen this winter. Dr. was attacked last evening with dizziness, and retired curly thinking thus to recover 1868. from it, but it lasted all night, and through this day. He was so dizzy that he could not sit up much nor walk without assistance. His stomach does not seem to be out of order, and we cannot account for the attack. Mr. Wallace dined with us. Nov. 10. Tuesday. We learn that Grant is elected President. The majority for him in this State is very small some 500 as is now supposed. Father called this evening. Nov. 11. Wednesday. Mrs. Brown picked the geese today. 30 in all. Nov. 12. Thursday. The weather is a little cloudy. Mother came in this eve and invited us all to come to Thanksgiving Dinner - two weeks from today. Nov. 13. Friday. There were twelve visitors at the Lodge tonight from Linden Lodge. The flour mills there are burned for the second time. Nov. 14. Saturday. About eleven o'clock today, George Franklin Locke dried. We did not know he was unwell until yesterday, when Dr. was sent for to see him. He was having fits, and not there conscious. I have been there this afternoon. How sad it looked to see him asleep in death. He has been so well and fat that the bereavement is all the more sudden. He was taken sick on Wednesday, about three days before his death with a chill, which did not seem to be severe, and he had but little fever, but after awhile the fever returned, and he complained much of pain in his leg, the cause of which pain no one knows. This pain and soreness increased untill he went into spasms on Friday morning, from which time until he died he had eight. He was heavier than Elmer, and seemed very bright. On Tuesday last he was here with the children, and left his play to come and talk to me. I thought, how much he is improving. Today, his eyes are forever closed in death. The funeral will be tomorrow at the school-house. He was four years and nearly three months old. Nov. 15. Sabbath. We have attended the funeral at the schoolhouse. Mr. Powell preached from the words of David on the death of his child, "I shall go to him, but he shall not