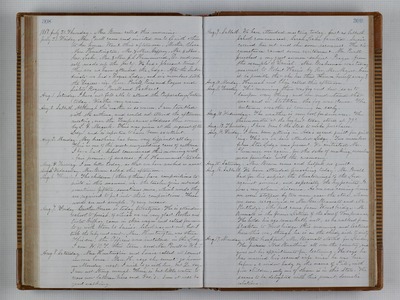 1868. July 30. Thursday. Mrs. Brown called this morning. July 31. Friday. Mrs. Powell came and invited me to go with others to her house. Went this afternoon. Mother, Clara Mrs. Huntington, Mr. & Mrs. Geffroy. Mr. & Mrs. Geo. Locke. Mr. & Mrs. J. S. Hammond, Dr. and myself made up the party. We had a pleasant time. This eve we have attended the Lodge. After the Subordinate we had a Degree Lodge, and six members took the Degrees – viz. Bros. Powell, Rice and Rogers and Sisters Rogers, Powell and Packard. Aug. 1. Saturday. I have not felt able to attend the Preparatory Lecture today. Weather very warm. Aug. 2. Sabbath. Although the weather is so warm, I am troubled with the asthma, and could not attend the afternoon meeting, nor the Temperance Address this evening by L. J. Megerle. This was given at the request of the Lodge, and is reported to have been excellent. Aug. 3. Monday. My breathing has been very difficult all day. This is one of the most unyielding cases of asthma I have had. School commenced this morning with a fair promise of success. J. S. Hammond - teacher. Aug. 4. Tuesday. I am better today, so that we have washed as usual. Aug. 5. Wednesday. Mrs. Brown called this afternoon. Aug. 6. Thursday. The children (three of them) have compositions to write in this manner, viz. the teacher gives out words sometimes fifteen, sometimes more, which words they are required to put into their compositions. These words are not simple, by any means. Aug. 7. Friday. Brother Horace is today twentyone. He is attending school to Josiah, of which we are very glad. Brother and Sister Geffroy came in their wagon and called for me to go with them to Susie's. School was not out, but I took the baby and went. Mrs. Huntington was there. This eve, the Officers were installed in the Lodge. I am W. V. T. this term, and Mr. Powell is W. C. T. Aug. 8. Saturday. Mrs. Huntington and Susie called all round on one horse. Mrs. H. says she must go home on Monday next. I wish to go with her, but Dr. say, I am not strong enough. There is but little water to cross now between here and Geo.'s. Soon it will be good walking. Aug. 9. Sabbath. We have attended meeting today. Just as Sabbath School commenced, Sarah Locke fainted. Susie carried her out and she soon recovered. The circumstance caused some excitement. Mr. Powell preached a very good sermon - subject - Prayer - from the example of Daniel. Mrs. Brakeman was today married to Robert Harris by Rev. Mr. Myers. Can it be possible that she has thus thrown herself away? Aug. 10. Monday. Hannah and Eliza called this afternoon. Aug. 11. Tuesday. This morning there was fog and dew, so as to dampen every thing, and we understand that near and in Stockton, the fog was dense. The Autumn weather is coming on early. Aug. 12. Wednesday. The weather is very cool for summer. The thermometer at the highest today stood at 79º. Aug. 13. Thursday. I have been to the Store to make purchases. Aug. 14. Friday. I have been getting in Ada's second quilt for quilting. This eve we have attended Lodge. Two members from Star Lodge were present. We initiated Mr. Slummer over again, for the sake of making ourselves more familiar with the ceremony. Aug. 15. Saturday. Mrs. Brown came and helped us quilt. Aug. 16. Sabbath. We have attended preaching today. Mr. Powell had for his subject, the threatenings of the Lord against sinners, and especially the hypocrites. It was a very solemn discourse. As we were coming home we were stopped by two men near the store, whom we soon recognized as Mr. Geo. Bramall and Mr. Rutledge, who had come from Wood bridge. Mr. Bramall is the former Lecturer of the Sons of Temperance. He holds his age remarkably well, as he walked from Stockton to Wood bridge this morning and lectured here this eve, though he is on the shady side of sixty. Aug. 17. Monday. After breakfast, Mr. Bramall started for Linden. He precedes "Ned Buntline" all over the country, and gives out his appointments for lecturing. He says he has married his second wife since he was here before - a window lady by the name of Pile, with five children, only one of whom is in this State. He seems to be delighted with his present domestic relations.